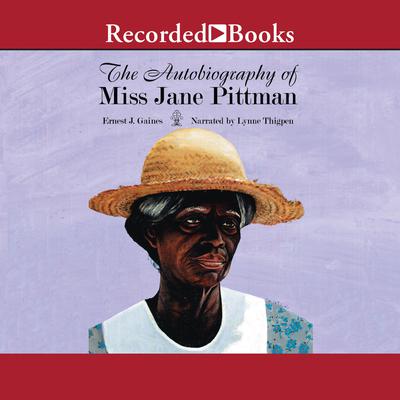 The Autobiography of Miss Jane Pittman

The Autobiography of Miss Jane Pittman has sold over a million copies nationwide since its publication in 1971, making the fictional character of Miss Jane so real many people don't know she exists only in the imagination of Louisiana-born author Ernest J. Gaines. Miss Jane is 100 years old when she is interviewed by an area high school teacher looking to teach his students more about plantation society in the deep South. Her story is not only a vivid picture of the South before the dawn of the civil rights era, but also a story of one woman's survival against overwhelming odds. A stunning autobiography of a courageous woman who won her battles with grace and dignity. Born a slave and freed when she was ten, Jane leaves the plantation of her childhood and heads in the direction of Ohio in search of a white abolitionist who once befriended her. Accompanied by Ned, a young orphan, Jane struggles to get out of Louisiana. What happens in the years that follow is a tale of loss and heartache and renewed hope, imprinted on its aged teller's face like furrows in a russet field. Now, in the racial upheavals of the '60s, Miss Jane brings closure to one generation, and inspiration to the next.

“Stunning. I know of no black novel about the South that exudes quite the same refreshing mix of wit and wrath, imagination and indignation, misery and poetry.” —Life

Ernest J. Gaines is a writer-in-residence at the University of Louisiana at Lafayette. His 1993 novel, A Lesson before Dying, won the National Book Critics Circle Award for fiction, was nominated for the Pulitzer Prize, and was an Oprah Book Club pick in 1997. In 2004, he was nominated for the Nobel Prize in Literature.