The Battle for Paradise: Puerto Rico Takes On the Disaster Capitalists

A #1 Amazon bestseller in disaster relief

In the rubble of Hurricane Maria, Puerto Ricans and ultrarich “Puertopians” are locked in a pitched struggle over how to remake the island.

In this vital and startling investigation, New York Times bestselling author and activist Naomi Klein uncovers how the forces of shock politics and disaster capitalism seek to undermine the nation’s radical, resilient vision for a “just recovery.”

All royalties from the sale of this book in English and Spanish go directly to JunteGente, a gathering of Puerto Rican organizations resisting disaster capitalism and advancing a fair and healthy recovery for their island. For more information, visit http://juntegente.org.

“This short audiobook packs as potent a punch as the hurricanes that devastated the island of Puerto Rico in 2017…Narrator Erin Bennett approaches this work in a clear, authoritative voice that reflects the no-nonsense tone of Klein’s words. Bennett takes control immediately, pausing effectively and pacing herself so that we can both understand and analyze the book’s message. Even more memorable, she maintains a measured approach even when the message becomes fiery.” —AudioFile
“Hurricane Maria left more than destruction in its wake. There is now a brewing political conflict over how to rebuild Puerto Rico, the subject of Klein’s investigation…On one side are what she calls the ‘disaster capitalists’ looking for a profit, and on the other, local communities.” —New York Times
“Fearless necessary reporting…Klein exposes the ‘battle of utopias’ that is currently unfolding in storm-ravaged Puerto Rico.” —Junot Díaz, New York Times bestselling author
“A revealing, on-the-ground report that ably shows that the real looters after disaster are not the poor.” —Kirkus Reviews
“Lays out the challenges facing Puerto Ricans who seek to transform their island into a democratic polity that serves the people’s interests rather than colonial kleptocracy…A welcome update on the situation in Puerto Rico—one that portends similar battles worldwide as climate change accelerates.” —Publishers Weekly
“This book explains, with careful and unbiased reporting, only the efforts of our community activists can answer the paramount question: What type of society do we want to become and who is Puerto Rico for?” —Carmen Yulín Cruz, mayor of San Juan, Puerto Rico
“There’s no-one better to tell the story of Hurricane Maria and its global significance than Naomi. In the face of speculation, exploitation ,and climate crisis, this book calls on us to recognize Puerto Rico’s struggle for democracy, justice, and human life itself, as our own.” —Ada Colau Bollano, mayor of Barcelona, Spain
“A gripping and timely account of classic ‘shock doctrine’ being perpetrated in Puerto Rico. Naomi Klein chronicles the extraordinary grassroots resistance by the Puerto Rican people against neoliberal privatization and Wall Street greed in the aftermath of the island’s financial meltdown, of hurricane devastation, and of Washington’s imposition of an outside control board over the most important US colony.” —Juan González, cohost of Democracy Now! and author of Harvest of Empire: A History of Latinos in America 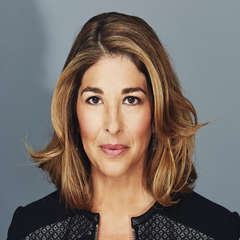 Naomi Klein is an award-winning journalist, syndicated columnist, and author of the international bestsellers No Logo, The Shock Doctrine, and most recently This Changes Everything: Capitalism vs. the Climate. In 2017 she joined The Intercept as Senior Correspondent.