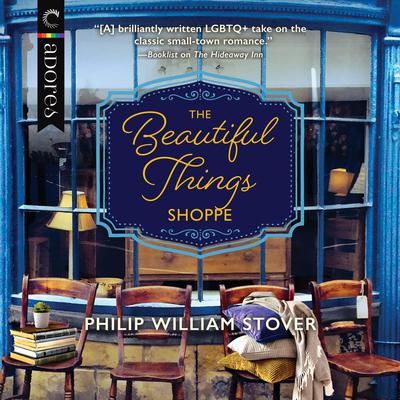 Philip William Stover takes readers back to the Schitt’s Creek-ian world of New Hope, Pennsylvania with this second book in the Seasons of New Hope series.

When well-groomed but uptight Prescott Henderson arrives at The Beautiful Things Shoppe ready to make a name for himself as an appraiser of fine art he’s shocked—and slightly disgusted—to see someone else setting up the window display.

With the most hideous object he’s ever seen.

Turns out the retiring owner leased the space to Prescott … and Danny Hernandez, an ebullient lover of all things pop culture. Danny thinks Prescott’s merchandise belongs in an old-age home and Prescott thinks Danny’s vintage Happy Meal toys are anything but happy.

After weeks of heated arguments they finally agree on a period of détente in order to get through New Hope’s Winter festival and generate some much-needed cash for the shop. After a successful festival Danny discovers that the mid-century bank on the corner is going to be torn down. Prescott is uninterested until he learns that the 19th century Yardley House is also in the path of the wrecking ball.

They have to work together to make The Beautiful Things Shoppe a success and save the historic buildings—but just as tensions between them begin to cool, their passion for each other starts to heat up.

Philip William Stover is a freelance journalist, his essays and reviews have appeared in Newsday, the Forward, the Tony Awards, the Atlanta Journal-Constitution, the Houston Chronicle, the Milwaukee Journal Sentinel, and other national publications. For many years he ghosted for an international best-selling women’s fiction author. He has published multiple middle-grade novels for Simon & Schuster and was the American Theater critic for About.com.