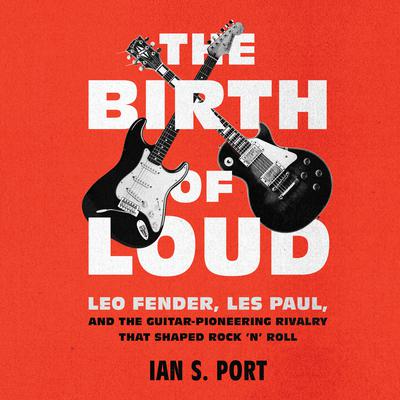 A #1 Amazon.com bestseller in Popular Culture

“A hot-rod joy ride through mid-20th-century American history” (The New York Times Book Review), this one-of-a-kind narrative masterfully recreates the rivalry between the two men who innovated the electric guitar’s amplified sound—Leo Fender and Les Paul—and their intense competition to convince rock stars like the Beatles, Jimi Hendrix, and Eric Clapton to play the instruments they built.

In the years after World War II, music was evolving from big-band jazz into rock ’n’ roll—and these louder styles demanded revolutionary instruments. When Leo Fender’s tiny firm marketed the first solid-body electric guitar, the Esquire, musicians immediately saw its appeal. Not to be out-maneuvered, Gibson, the largest guitar manufacturer, raced to build a competitive product. The company designed an “axe” that would make Fender’s Esquire look cheap and convinced Les Paul—whose endorsement Leo Fender had sought—to put his name on it. Thus was born the guitar world’s most heated rivalry: Gibson versus Fender, Les versus Leo.

While Fender was a quiet, half-blind, self-taught radio repairman, Paul was a brilliant but headstrong pop star and guitarist who spent years toying with new musical technologies. Their contest turned into an arms race as the most inventive musicians of the 1950s and 1960s—including bluesman Muddy Waters, rocker Buddy Holly, the Beatles, Bob Dylan, and Eric Clapton—adopted one maker’s guitar or another. By 1969 it was clear that these new electric instruments had launched music into a radical new age, empowering artists with a vibrancy and volume never before attainable.

“A scrupulously sourced, flashily written narrative about the (inevitable) coming of the electric guitar.” —New York Times Book Review
“An essential, colorful, and gripping history of the electric guitar…[from] the best new nonfiction writer of the past twenty years.” —Daniel J. Levitin, New York Times bestselling author
“Fascinating…One of Port’s true strengths [is] his ability to marry an agreeably anecdotal writing style to a musician’s ear…The story of these instruments is the story of America in the postwar era: loud, cocky, brash, aggressively new.” —Washington Post
“[The] definitive history of the electric guitar and its two foundational personalities…Port can spin out evocative, succinct rock ’n’ roll writing with the best of them.” — New York Journal of Books
“A rip-roaring journey through the early days of rock ‘n’ roll…A lively, difficult-to-put-down portrait of an important era of American art.” —Kirkus Reviews (starred review)

Ian S. Port is an award-winning writer and music critic whose work has appeared in Rolling Stone, Village Voice, The Threepenny Review, and The Believer, among others. He is also the former music editor of the San Francisco Weekly. A California native and lifelong guitar player, he now lives in New York with his wife, Lindsay.