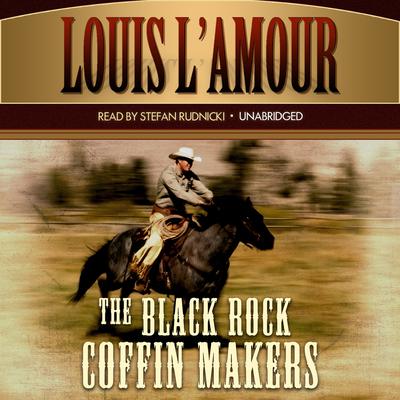 Two men in the isolated town of Tucker want the XY ranch—Jim Walker and the ruthless Wing Cary—and one of them wants it badly enough to kill for it.

The Black Rock Coffin Makers is a tale of suspense and danger, with chases, shootouts, double-crosses and posses, all for possession of the XY ranch.

“A strong case can be made that L’Amour was the most popular American writer of the twentieth century…His books embody heroic virtues that seem to matter now more than ever.” —Wall Street Journal
“L’Amour is the kind of storyteller who makes the wolves come out of the woods to listen.” —People
“L’Amour never writes with less than a saddle creak in his sentences and more often with a desert heat wave boiling up from a sun-baked paragraph.” —Kirkus Reviews
“[L’Amour’s] characterizations, attention to detail, and well-placed surprises make his writing continue to resonate after half a century.” —AudioFile