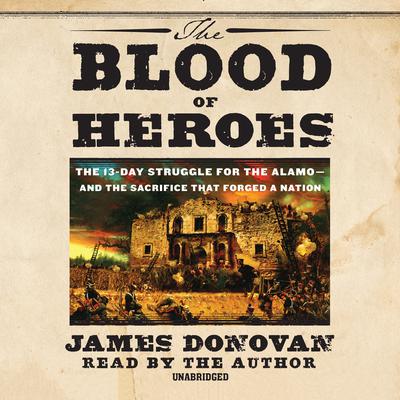 The Blood of Heroes: The 13-Day Struggle for the Alamo—and the Sacrifice that Forged a Nation

For almost two centuries, the last stand at the Alamo has been recognized as a defining moment in America's history. On February 23, 1836, a Mexican army thousands of soldiers strong attacked a makeshift garrison of about two hundred Texas settlers—among them, Davy Crockett, James Bowie, and William Barret Travis—who were holed up in the abandoned mission on the outskirts of San Antonio. The Texans refused to surrender, and for almost two weeks, the immense force laid siege to the fort, bombarding its occupants with a constant barrage of artillery fire. Then, in the predawn hours of March 6, the Mexican troops unleashed a final devastating assault. What happened next would become legend. In The Blood of Heroes, bestselling historian James Donovan, drawing on fresh primary sources in American and Mexican archives, offers an authoritative and thrilling account of this epic battle. Beginning his narrative well before the siege, he tells the fascinating story of the settling of the Texas wilderness, the rise of the Mexican dictator Santa Anna, and the crucial roles played by pioneers such as Sam Houston and Stephen F. Austin amid the growing storm of despotism and discontent that led the Texas settlers to fight valiantly for independence. The Blood of Heroes is a masterful work of scholarship and storytelling—and a stirring tale of courage, redemption, and glory in the American West.

“The best book on the battle [of the Alamo]...Donovan has a splendid sense of historical narrative...Those making their entrance into Alamo lore for the first time are well advised to begin with The Blood of Heroes.” —Houston Chronicle
“The best book on Texas history…This is a big deal…It’s probably the best nonfiction I have read about Texas, history told in a way that reads like fiction…The Blood of Heroes is a good book for anyone with a love of history.” —Dallas Morning News
“Mr. Donovan’s gripping book is history at its best—exactingly sourced and written with a vividness that challenges you to put it down. Even those familiar with an oft-told story will delight in the richness of his detail.” —The Washington Post
“In his page-turning newest, Donavan brings the famed Battle of the Alamo and its dynamic cast of belligerents to life…Drawing on plenty of research and primary sources from both sides of the conflict, Donovan breathlessly recreates the thirteen day skirmish between the roughly 200 men under Travis, and the nearly 2,000-strong army fighting for Mexican President Santa Anna…Were it not for the resolve of Travis and his men…the Republic of Texas may have never come into existence.” —Publishers Weekly

James Donovan is the author of three bestselling books of history, Shoot for the Moon: The Space Race and the Extraordinary Voyage of Appollo 11, The Blood of Heroes: The 13-Day Struggle for the Alamo—and the Sacrifice That Forged a Nation, and A Terrible Glory: Custer and the Little Bighorn—the Last Great Battle of the American West.