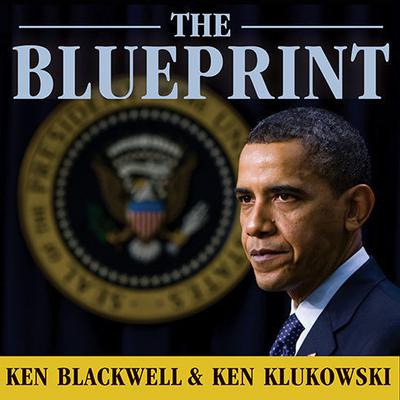 The Blueprint: Obama's Plan to Subvert the Constitution and Build an Imperial Presidency

By Ken Blackwell and Ken Klukowski
Read by Kevin Foley

From noted conservative leader Ken Blackwell and Washington, D.C.–based constitutional attorney and journalist Ken Klukowski comes an urgently needed book about President Barack Obama's blueprint to centralize power in the White House, subvert the Constitution, and transform the United States of America into a militant, secular welfare state dominated by an overbearing central government. The authors identify and discuss more than twenty tactics being taken by the Obama administration to restructure the country and ensure perpetual liberal rule—such as changing voting laws, politicizing the census, coercing corporations into adopting its policies, planning to destroy talk radio, and seeking to make millions of illegal aliens into voting citizens. By means both sharp and subtle, President Obama aims to change Americans' views about government, liberty, and even God. —Czars: The authors show how Obama is installing a shadow government of radical appointees not subject to Senate confirmation and answerable to no one but him. —Courts: The authors have insider knowledge of how Obama will pack the Supreme Court and lower courts with activist judges who will overstep their constitutional authority. —When Lawmaking becomes Lawbreaking: The authors reveal the ways Obama is consolidating lawmaking power in the White House, in direct violation of our nation's separation of powers. —Changing the American Identity: The authors show how Obama is using unconstitutional tactics to change how we conduct commerce, how we vote, our right to bear arms, and the free-speech rights of opposition voices.

Ken Blackwell, one of America’s leading conservative voices, is the author of Rebuilding America and is currently a senior fellow with the Family Research Council and the American Civil Rights Union. He has served as Ohio’s state treasurer and secretary of state, mayor of Cincinnati, undersecretary at the United States Department of Housing and Urban Development, and United States ambassador to the United Nations Human Rights Commission. Cochair of the Republican National Committee’s Redistricting Committee, he is on the board of directors of the National Rifle Association, the Club for Growth, the National Taxpayers Union, and the Ashbrook Center for Public Affairs. Blackwell is a contributing editor for Townhall.com, and his columns have appeared in the Wall Street Journal, Washington Times, New York Post, American Spectator, American Thinker, and World Magazine, as well as on NationalReview.com and FoxNews.com. He and his wife live in Cincinnati, Ohio.

Ken Klukowski is a constitutional lawyer and journalist whose work has been published by FoxNews.com, BigGovernment.com, and Townhall.com. He is a fellow and senior legal analyst with the American Civil Rights Union. A published scholar on constitutional issues, Klukowski authors briefs with the Supreme Court regarding First Amendment and Second Amendment cases, and he lectures across the country at law schools. He lives in the suburbs of Washington, DC, with his wife and their children.