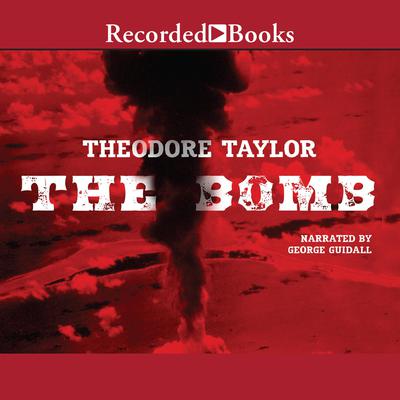 Winner of the 1996 Scott O’Dell Award for Historical Fiction

The winner of the Scott O'Dell Award, The Bomb is a powerful history lesson and a gripping tale of suspense that no listener will ever forget. In 1946, sixteen-year-old Sorry Rinamu watches as U.S. Navy warships appear off the coast of Bikini Island. The U.S. Government wants to test the deadly power of the atomic bomb-and Sorry's island has been chosen as the test site. The young man knows he must stop the Americans from dropping the bomb-even if it means defying orders from the U.S. Government and risking his own life.

“A haunting, soundly researched work.” —Publishers Weekly
“Taylor takes readers on an absorbing excursion, offering vivid descriptions, rich details of Micronesian culture, and a poignant contrast between the peaceful tranquility of the Marshall Islands and the industrialized West. The plot moves briskly with the tension of heroic confrontation. Readers will be challenged with the issues of war, the ethics of nuclear weapons, and the destruction of ancient cultures.” —School Library Journal

Theodore Taylor (1921-2006) was born in North Carolina and authored more than fifty books for children and adults. His novel The Weirdo won the Edgar Allen Poe Award for Best Young Adult Mystery in 1992. He is best known for The Cay, which is considered a classic of young adult literature and is required reading in many schools across the US and internationally. The Cay won eleven literary awards, including the Lewis Carroll Shelf Award, and was made into a television movie starring James Earl Jones in 1974.