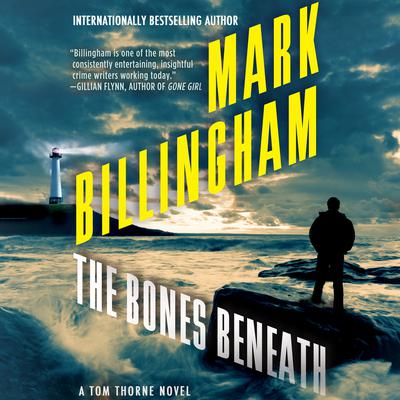 In The Bones Beneath, the latest addition to the internationally bestselling Tom Thorne series, Thorne once again must confront Stuart Nicklin, a master manipulator and ruthless murderer. When Nicklin announces that he wishes to reveal the whereabouts of one of his earliest victims and that he wants the cop who caught him to be there when he does it, it becomes clear that Thorne’s life is about to become seriously unpleasant. Thorne is forced to accompany Nicklin to a remote island off the Welsh coast which is cut off from the mainland in every sense. Shrouded in myth and legend, it is said to be the resting place of 20,000 saints, and as Thorne and his team search for bones that are somewhat more recent, it becomes clear that Nicklin’s motives are darker than could be imagined.

The twisted scheme of a dangerous and manipulative psychopath will result in many more victims and will leave Tom Thorne with the most terrible choice he has ever had to make.

“Billingham delights in toying with his audience, and most readers’ nerves will be shredded long before the sadistic import of Nicklin’s deep-laid plot finally becomes clear. Thorne’s twelfth is a tour de force of suspense that dares you to guess the secrets of a magician who’s made his intentions perfectly clear from the very beginning.” —Kirkus Reviews (starred review)
“In Billingham’s chilling twelfth novel featuring Det. Insp. Tom Thorne, serial killer Stuart Nicklin offers to lead the police to the remains of one of his first victims—a fifteen-year-old boy who vanished twenty-five years ago…Billingham certainly knows how to make those pages turn.” —Publishers Weekly
“In this twelfth series entry, the good news is that Tom Thorne has been reinstated to his rightful place on the Murder Squad. But that comes with a catch. In this case, he’s delegated, along with a gaggle of forensics investigators and local constabulary, to accompany two prisoners (one a formidable and outrageous serial murderer named Stuart Nicklin, who was captured by Thorne years before) to a remote, forbidding, and bewitching isle off the Welsh coast…Any fans of Ian Rankin and John Harvey unfamiliar with this series should have the good luck to hop aboard.” —Library Journal
“In the twelfth series entry, Billingham makes the most of his bleak, rugged setting while creating an atmosphere of chilling menace.” —Booklist