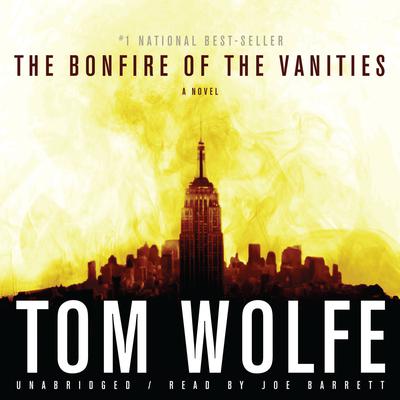 The Bonfire of the Vanities

Winner of the 1988 Ambassador Book Award for Fiction

A Kirkus Reviews Pick of 10 Classics That Never Grow Old

Tom Wolfe’s bestselling modern classic tells the story of Sherman McCoy, an elite Wall Street bond trader who has it all: wealth, power, prestige, a Park Avenue apartment, a beautiful wife, and an even more beautiful mistress, until one wrong turn sends Sherman spiraling downward in a humiliating fall from grace.

A car accident in the Bronx involving Sherman, his girlfriend, and two young lower-class black men sets a match to the incendiary racial and social tensions of 1980s New York City. Suddenly, Sherman finds himself embroiled in the most brutal, high-profile case of the year, as prosecutors, politicians, the press, the police, the clergy, and assorted hustlers rush in to further their own political and social agendas. With so many egos at stake, the last priority on anyone’s mind is truth or justice.

“Impossible to put down.” —Wall Street Journal
“A big, bitter, funny, craftily plotted book that grabs you by the lapels and won’t let go.” —New York Times Book Review
“Narrator Joe Barrett sends shivers up the spine…Wolfe’s Bonfire still burns bright with wit, mastery of plot and character, and an astonishing eye for detail.” —AudioFile
“If you saw the movie and liked it, listen to this audiobook, which is a thousand times better.” —SoundCommentary.com
“Sheer entertainment against a fabulous background…Wolfe triumphantly mounts scene after magnificent scene depicting the vanity of human endeavor, with every character measured by his shoes and suits or dresses, his income and expenses, and with his vain desires rising in smoke against settings that would make a Hollywood director’s tongue hang out. Often hilarious, and much, much more.” —Kirkus Reviews (starred review)
“Erupting from the first line with noise, color, tension and immediacy, this immensely entertaining novel accurately mirrors a system that has broken down: from the social code of basic good manners to the fair practices of the law…A brilliant evocation of New York’s class, racial and political structure in the 1980s.” —Publishers Weekly
“Wolfe’s genius may be better suited to fiction than to journalism; his novel has all the knowledge, insight, and wit of earlier works but tones down the notorious stylistic excesses. The result is not just Wolfe’s most successful book to date but one of the most impressive novels of the decade.” —Library Journal