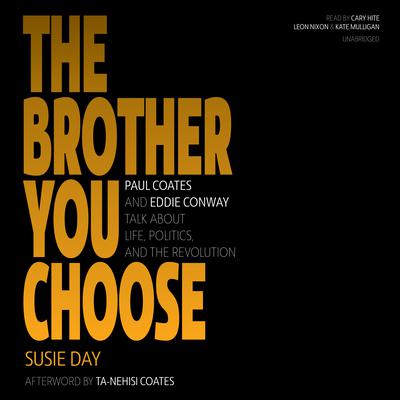 The Brother You Choose: Paul Coates and Eddie Conway Talk about Life, Politics, and the Revolution

In 1971, Eddie Conway, lieutenant of security for the Baltimore chapter of the Black Panther Party, was convicted of murdering a police officer and sentenced to life plus thirty years behind bars. Paul Coates was a community worker at the time and didn’t know Eddie well, and the little he knew, he didn’t much like. But Paul was dead certain that Eddie’s charges were bogus. He vowed never to leave Eddie—and in so doing, changed the course of both their lives.

For over forty-three years, as he raised a family and started a business, Paul visited Eddie in prison, often taking his kids with him. He and Eddie shared their lives and worked together on dozens of legal campaigns in hopes of gaining Eddie’s release. Paul’s founding of the Black Classic Press in 1978 was originally a way to get books to Eddie in prison. When, in 2014, Eddie finally walked out onto the streets of Baltimore, Paul Coates was there to greet him. Today, these two men remain rock-solid comrades and friends, each being the other’s chosen brother.

When Eddie and Paul met in the Baltimore Panther Party, they were in their early twenties. They are now into their seventies. This book is a record of their lives and their relationship, told in their own voices. Paul and Eddie talk about their individual stories, their work, their politics, and their immeasurable bond.

“This unique friendship born under the early idealism of the Black Panther Party within its stated goals and objectives brings smiles to one who has also struggled on the same streets as Paul Coates and Eddie Conway.” —Haki R. Madhubuti
“The Brother You Choose allows us to eavesdrop on a humor-filled, heartwarming conversation between Eddie Conway and Paul Coates, whose love for each other and for their people carried them through revolutionary struggles and decades of wrongful imprisonment. An engaging read, these deeply personal perspectives on a common journey toward Black liberation encapsulate a history critical to movement-building today.” —Natsu Taylor Saito, author of Settler Colonialism, Race, and the Law
"The Brother You Choose is a landmark book for anyone who wants to understand the deep connectivity of Black America. It provides a ringside seat to the bruising fight for Civil Rights with two men, Eddie Conway and Paul Coates, as they provide necessary lessons on politics, change, community and enduring bonds. Their journey together and their hard-earned insights span nearly fifty years of seismic change in America. We see it through their experiences from prison to publishing house, their transformation from Vietnam War vets to Black Panthers, and now as elders with critical perspectives for the Black Lives Matter movement. Susie Day captures the elixir of a fifty-year friendship and the extraordinary men at its heart. It’s a lesson in loyalty, commitment under fire, and what we can all do to make America keep its promise.” —Walter Mosley, New York Times bestselling author

Susie Day began listening to people in prison at the Washington, DC, jail, where she interviewed four women charged with the 1985 bombing of the US capitol.