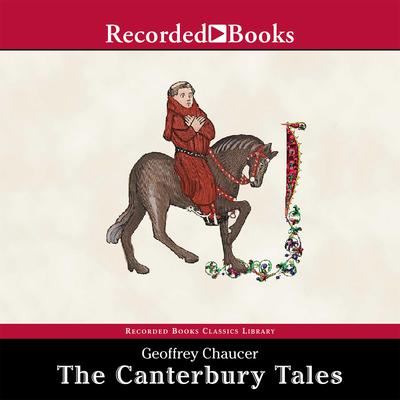 By Geoffrey Chaucer
Read by Various

Chaucer's (1340-1400) celebrated work begins at the Tabard Inn in Southwark, England, where a group of pilgrims has assembled on their way to Canterbury. Harry Bailly, the innkeeper, suggests a contest: whoever tells the best tale, "Shall have a supper at our aller cost/ Here in the place, sitting by this post/ When that we come again from Canterbury." Chaucer's Middle English has been here updated by Professor Michael Murphy of Brooklyn College, City University of New York. This is not a translation, but rather a modernization of the spelling and pronunciation of The Tales, leaving the grammar, syntax, and vocabulary unchanged. Thus Chaucer's poetry can be appreciated without the encumbrance of the difficult pronunciations of Middle English. Includes these tales: The Knight's; The Miller's; The Reeve's; The Wife of Bath's; The Friar's; The Clerk's; The Merchant's; The Franklin's; The Pardoner's; The Shipman's; The Prioress's; and The Nun's Priest's.

Geoffrey Chaucer (c. 1343–1400), English poet, was the son of a London vintner. He was married and held a number of positions at court and in the king’s service, including diplomat, controller of customs in the port of London, and deputy forester in the King’s Forest in Somerset. He was buried in the Poets’ Corner of Westminster Abbey where a monument was erected to him in 1555.