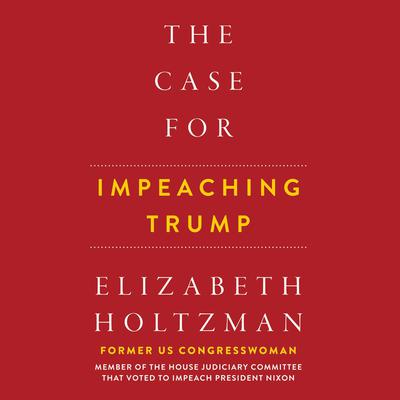 The Case for Impeaching Trump

"Elizabeth Holtzman has always been the first and the bravest, the smartest and most trusted. She is the expert we need to deal with an accidental President who got there as a serial sexual harasser, a candidate who lost the popular vote, and an unsuccessful businessman who was born on third base and thinks he hit a home run. Now what? Ask Liz!"―Gloria Steinem

Elizabeth Holtzman has been a principled leader and a persistent voice for equality and accountability since she became the youngest woman ever elected to Congress in 1973, which she remained for forty-two years. But she sees American democratic ideals, and the rule of law in the United States, eroding under President Trump. And as a member of the House Judiciary Committee that voted to impeach Nixon, and one of the members of the Homeland Security advisory council who resigned in protest of President Donald Trump’s policy of separating families at the border, former Congresswoman Holtzman knows that of which she speaks:

“President Donald Trump threatens our democracy. He lies, attacks our constitution, assaults the press, and obstructs justice. He causes unfathomable damage. The Constitution has a remedy for presidents who commit ‘great and dangerous offenses’: impeachment.

A fair, lawful, bipartisan impeachment inquiry into President Trump means getting to the bottom of things. It means analyzing with a clear head and heart what President Trump has done and what the law requires.

Impeaching a president is a grave undertaking. The compassionate and diverse America I know demands we get ready to do it.”

The Case for Impeaching Trump establishes the requirements for impeachment as set out by the Constitution and proves that President Trump’s actions have already met those requirements. Holtzman makes the definitive, constitutional case that Trump can be impeached―and the process should start now.

“Holtzman is courageous in writing this book…Given the new Congress and a new year coming, this is a timely read.” —New York Journal of Books
“Holtzman offers the Watergate investigation as a model for the kind of open, wide-ranging inquiry that she argues is necessary now.” —New York Review of Books

Elizabeth Holtzman is a former four-term Democratic congresswoman from New York. She served on the House Judiciary Committee that investigated the role of President Richard M. Nixon in the Watergate scandal and voted to impeach him. Her accomplishments in congress include bringing Nazi war criminals in the US to justice, creating the bipartisan caucus of congresswomen, and coauthoring the first special prosecutor legislation and the 1980 Refugee Act. She was later elected Brooklyn district attorney and comptroller of New York City, the first woman to hold either office. She is a graduate of Harvard Law School and Radcliffe College and practices law in New York. She is a frequent speaker about political affairs on MSNBC and CNN and other major news networks, a well-published author in the New York Times and other media outlets, and is the author of The Impeachment of George W. Bush, Who Said it Would be Easy?, Cheating Justice, and The Case for Impeachiing Trump.