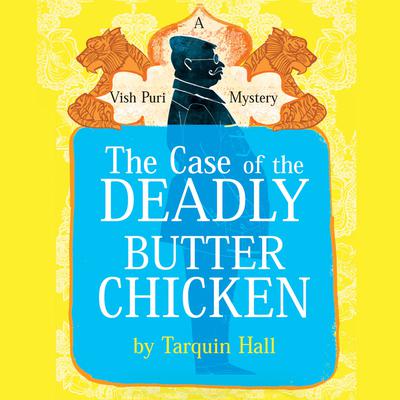 The Case of the Deadly Butter Chicken: From the Files of Vish Puri, India’s Most Private Investigator

Dubbed "a wonderfully engaging PI" (London Times), Tarquin Hall's irresistible protagonist Vish Puri has become an international favorite through a series that "splendidly evokes the color and bustle of Delhi and the tang of contemporary India" (Seattle Times). Now the gormandizing, spectacularly mustachioed sleuth finds himself facing down his greatest fears in an explosive case involving the Indian and Pakistani mafias.

When the elderly father of a top Pakistani cricketer playing in the multimillion-dollar Indian Premier League dies during a postmatch dinner, it's not a simple case of Delhi Belly. His butter chicken has been poisoned. To solve the case, Puri must penetrate the region's organized crime, following a trail that leads deep into Pakistan—the country in which many members of the PI's family were massacred during the 1947 partition of India. The last piece of the puzzle, however, turns up closer to home when Puri learns of the one person who can identify the killer. Unfortunately it is the one woman in the world with whom he has sworn never to work: his Mummy-ji.

“Outstanding third mystery…Well drawn, colorful characters bolster a whodunit sure to appeal to those who enjoy a dash of humor with their crime.” —Publishers Weekly (starred review)
“Hall has a gift for conveying the rich stew of competing cultures in contemporary India with a wonderful economy of image…Hall presents a complex hero in a complex country with a great deal of history, humor, and panache.” —Booklist (starred review)
“A wry whodunit, with recipes.” —People
“Vish’s third outing continues the tradition of Hall’s lively franchise.” —Kirkus Reviews

Tarquin Hall is a writer and journalist who has lived and worked in much of South Asia, the Middle East, Africa, and the United States. He is the author of Mercenaries, Missionaries, and Misfits: Adventures of an Underage Journalist; To the Elephant Graveyard; Salaam Brick Lane: A Year in the New East End; and the Vish Puri series of mystery novels.