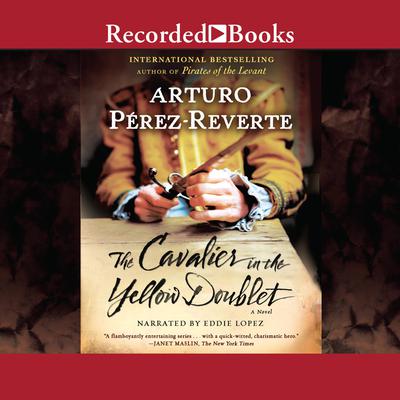 The Cavalier in the Yellow Doublet

The fifth novel in the adventures of Captain Alatriste, a seventeenth-century swashbuckler and a twenty-first-century literary phenomenon(Entertainment Weekly). In the cosmopolitan world of seventeenth-century Madrid, Captain Alatriste and his protégé Íñigo are fish out of water. But the king is determined to keep Alatriste on retainerregardless of whether his "employment" brings the captain uncomfortably close to old enemies. Alatriste begins an affair with the famous and beautiful actress, María Castro, but soon discovers that the cost of her favors may be more than he bargained forespecially when he and Íñigo become unwilling participants in a court conspiracy that could lead them both to the gallows.

Arturo Pérez-Reverte’s bestselling books, including The Club Dumas, The Flanders Panel, The Seville Communion, and the Captain Alatriste series, have been translated into thirty-four languages in fifty countries and have sold millions of copies. Pérez-Reverte was born in 1951 in Cartagena, Spain, and now lives in Madrid, where he was recently elected to the Spanish Royal Academy. A retired war journalist, he covered conflicts in Angola, Bosnia, Croatia, El Salvador, Lebanon, Libya, Nicaragua, Romania, the Persian Gulf, and Sudan, among others. He now writes fiction full time.