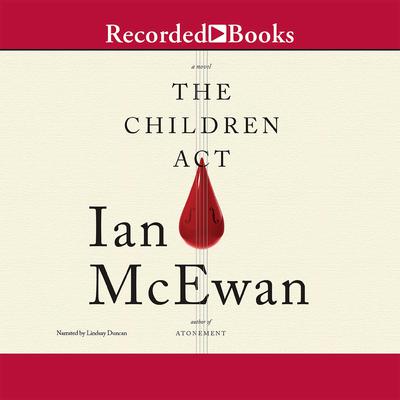 A Publishers Weekly Pick of the Week, September 2014

A brilliant, emotionally wrenching new novel from the author of Atonement and Amsterdam Fiona Maye is a High Court judge in London presiding over cases in family court. She is fiercely intelligent, well respected, and deeply immersed in the nuances of her particular field of law. Often the outcome of a case seems simple from the outside, the course of action to ensure a child's welfare obvious. But the law requires more rigor than mere pragmatism, and Fiona is expert in considering the sensitivities of culture and religion when handing down her verdicts. But Fiona's professional success belies domestic strife. Her husband, Jack, asks her to consider an open marriage and, after an argument, moves out of their house. His departure leaves her adrift, wondering whether it was not love she had lost so much as a modern form of respectability; whether it was not contempt and ostracism she really fears. She decides to throw herself into her work, especially a complex case involving a seventeen-year-old boy whose parents will not permit a lifesaving blood transfusion because it conflicts with their beliefs as Jehovah's Witnesses. But Jack doesn't leave her thoughts, and the pressure to resolve the case-as well as her crumbling marriage-tests Fiona in ways that will keep readers thoroughly enthralled until the last stunning page.

“Duncan’s voice has a maturity and pragmatism that suits Fiona’s characterization. Even as Fiona copes with difficult cases involving children and returns home to an empty house, Duncan remains steady and never maudlin. One can fully imagine Fiona retaining her dignity in the presence of these personal and professional storms, and so Duncan succeeds in this high-quality audiobook.” —AudioFile
“Thoughtful, well-wrought novel…McEwan, always a smart, engaging writer, here takes more than one familiar situation and creates at every turn something new and emotionally rewarding.” —Kirkus Reviews (starred review)

Ian McEwan is the author of more than a dozen books, including either New York Times bestsellers. His novel Amsterdam won the 1998 Book Prize; Atonement, won the National Book Critics Circle Award and the W. H. Smith Literary Award; and The Child in Time won the Whitbread Award. His story collection, First Love, Last Rites, won the Somerset Maugham Award.