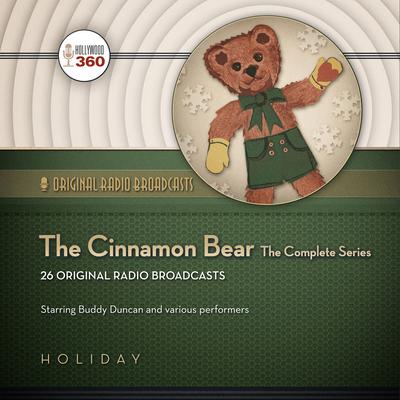 The Cinnamon Bear: The Complete Series

The Cinnamon Bear is arguably the best holiday series ever developed for radio. First heard in 1937, this wonderful Christmas fantasy adventure was created and written by Glanville Heisch (with the help of his wife, Elisabeth) for children of all ages. It all starts with twins Judy and Jimmy Barton just before Christmas. Someone—or something—has taken the "Silver Star" for the top of their Christmas tree. The very Irish teddy bear, Paddy O'Cinnamon, comes to their rescue and tells them that the Crazy Quilt Dragon has taken the star to Maybeland. The three venture off to find the Silver Star and come face-to-face with many fantastical characters in Maybeland, including a dragon, a witch, a whale, a queen, a rhyming rabbit, a magician, cowboys, a gentle giant, and even pirates.  The adventure concludes with a trip to the North Pole to meet Santa Claus himself!

Many well-known radio actors lent their voices to this popular series, including Howard McNear, Gale Gordon, Verna Felton, Frank Nelson, Elliott Lewis, Lou Merrill, and Joseph Kearns. Judy Barton was played by Barbara Jean Wong, Jimmy Barton by Tommy Carr, and Paddy O'Cinnamon by Buddy Duncan. Now, in collaboration with the Heisch estate, we bring you all twenty-six episodes of The Cinnamon Bear, recorded directly from the original masters for superb sound quality.

Episodes include "Surprised by the Cinnamon Bear"; "Piloted through the Attic Tunnel"; "Stranded in Looking Glass Valley"; "Captured by Ruthless Ink Blotters"; "Outwitted by a Polka Dot Whale"; "Frustrated by a Pelican"; "Intrigued by a Treasure Chest"; "Befriended by Pirates"; "Upset by a Mysterious Force"; "Approached by a Giant"; "Scared by Yellow Flashing Lights"; "Trapped in a Forest"; "Threatened by a Witch"; "Helped by Queen Melissa"; "Foiled by a Crocodile"; "Obstructed by a Deep, Dark Well"; "Pelted with Mud"; "Chased by Indians"; "Confronted by an Angry Witch"; "Lulled to Sleep by a Singing Tree"; "Flown to the Land of Ice and Snow"; "Welcomed by Santa Claus"; "Enchanted by Santa's Storeroom"; "Thrilled by a Train Ride"; "Betrayed by Crazy Quilt"; and "Returned to the Attic."