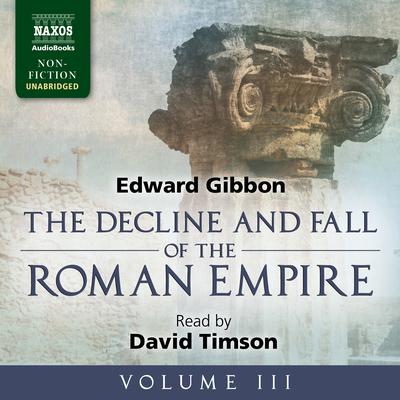 The Decline and Fall of the Roman Empire, Volume III

The Decline and Fall of the Roman Empire has always maintained its appeal to both the general public and scholars. Its sheer scale is daunting, encompassing over a millennium of history, covering not merely the Western Empire from the days of the early emperors to its extinction in AD 476 but also the Eastern Empire, which lasted for another thousand years until the Turks vanquished it in 1453. But Gibbon’s style, part historical fact and part literature, is enticing, and the sheer honesty of the man, who endeavours to be scrupulously impartial in his presentation, endears him to the reader.

In this recording, David Timson incorporates the most salient of Gibbon’s footnotes. In volume three (chapters XXVII–XXXVI), Gibbon charts the fall of the Western Empire. Starting with the reign of Emperor Gratian (d. AD 383), his survey moves to political and religious issues in the East and West before covering the increasing military power of the Barbarians. Occasionally a great Roman general emerges to stem the tide, but internecine power struggles see the Western Empire weakened, until Gaul, Britain, Spain, and other territories find themselves, as the fifth century advances, unable to rely on Rome for defense.

Edward Gibbon (1737–1794), an English historian and member of Parliament, had little formal education. He went to Oxford, but was forced to leave when he converted to Roman Catholicism. His family then sent him to Lausanne, where he was reconverted to Protestantism. His most important work, The Decline and Fall of the Roman Empire, was published in six volumes between 1776 and 1788.