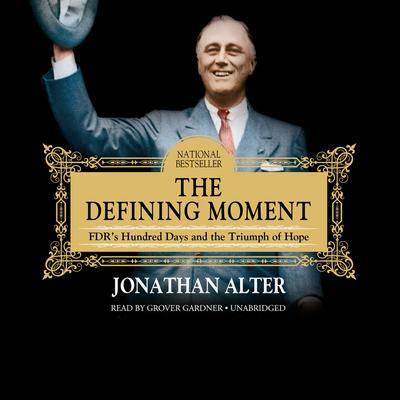 The Defining Moment: FDR’s Hundred Days and the Triumph of Hope

In this dramatic and fascinating account, Newsweek columnist Jonathan Alter shows how Franklin Delano Roosevelt used his first one hundred days in office to lift the country from the despair and paralysis of the Great Depression and transform the American presidency. Instead of becoming the dictator so many wanted in those first days, FDR rescued banks, put men to work immediately, and laid the groundwork for his most ambitious achievements, including what eventually became the Social Security Administration. Alter explains how FDR’s background and experiences uniquely qualified him to pull off an astonishing conjuring act that saved both democracy and capitalism.

“Alter’s account has a refreshing buoyancy, not unlike its protagonist…describing Roosevelt’s missteps as honestly as his triumphs, it succeeds in bringing a remarkable man back to life.” —New York Times Book Review
“Most Americans believe Roosevelt was a great man and a great president. Alter shows us that in the end magnificent rhetoric and action do not always bring concrete results.” —Washington Post
“A book like this, revealing the power of presidential speeches, should be read—in FDR’s repetition for emphasis—’again and again and again.’” —William Safire
“Jonathan Alter’s The Defining Moment is an extraordinarily vivid account of a remarkable moment in American history. It is also a rich and perceptive examination of how Franklin Roosevelt transformed the presidency. This book should be of interest to everyone who cares about the New Deal, and also to everyone who wants to understand the character of American politics.” —Alan Brinkley, author of The End of Reform: New Deal Liberalism in Recession and War
“In The Defining Moment, one of the shrewdest political observers of our time turns his spotlight on the man who may have been the ablest American politician of all time.” —Geoffrey C. Ward, author of Before the Trumpet and A First-Class Temperament
“The Defining Moment is a riveting account of the first hundred days of Franklin D. Roosevelt’s presidency. Alter bewitches readers in this fast-moving story, often poignant, sometimes funny, of how Roosevelt changed the direction of American history.” —David Herbert Donald, author of Lincoln
“The Defining Moment should be required reading for every president, every student of leadership, and anyone who appreciates narrative history at its finest.” —Richard Norton Smith, author of An Uncommon Man: The Triumph of Herbert Hoover

Jonathan Alter is an analyst and contributing correspondent for NBC News and MSNBC. He is a former senior editor and columnist for Newsweek, where he worked for twenty-eight years, writing more than fifty cover stories. He has also written for the New York Times, the Washington Post, the Atlantic, Vanity Fair, the New Republic, and other publications. He is the author of The Promise: President Obama, Year One and The Defining Moment: FDR’s Hundred Days and the Triumph of Hope, both New York Times bestsellers, and Between the Lines, a collection of his Newsweek columns.