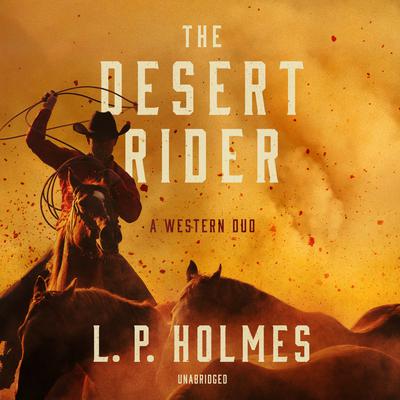 The Desert Rider: A Western Duo

In Black Rock Desert, when Lee Cone is hired by Braz Boland to chouse a herd of horses from Carbide Junction into Maacama Basin through Black Rock Desert, he has no idea that it will reignite the old enmity between himself and Tasker Scott. Cone had left the basin two years earlier, when the girl he loved married Scott. When the horse herd reaches Antelope, the basin’s town, Boland refuses to pay Cone because of a horse stampede that happened going through the pass into the basin. Cone quickly learns that Scott has been running rough-shod over the basin and that his old partner in the Flat T Ranch, Buck Theodore, has been made destitute due to the rustling of their stock. Cone is determined to find out what has been going on in the basin, even if it means hurting the woman he once loved.

In the title story, Buck English has been a hard and bitter loner willing to step outside the law ever since his father, Martin, former sheriff of the county, had been killed by outlaws. A friend of Martin’s, Jack Carleton, is sheriff now as well as the owner of the Red Mesa Ranch. Carleton fears that someday he will have to go after Buck if he continues on the trail he is on. To that end, he hires Buck to take over the ramrodding of his ranch as his duties as sheriff do not allow him to tend to the duties of his ranch, which has been suffering from rustling. Buck agrees, but he must submit to Carleton’s order that gunplay is not allowed.

L. P. Holmes (1895–1988), also known as Matt Stuart, was the author of several outstanding Western novels, including Somewhere They Die, which won the Spur Award from the Western Writers of America. Born in a log cabin in the heart of the Rocky Mountains near Breckenridge, Colorado, he moved with his family when very young to Northern California. It was there that his father and older brothers built the ranch house where he grew up and where, in later life, he would live again. He published his first story, “The Passing of the Ghost,” in Action Stories in 1925. He was paid half a cent per word and received a check for forty dollars. He went on to contribute nearly six hundred stories of varying lengths to the magazine market as well as to write numerous Western novels. In his stories, one finds the common themes in Western fiction: the loyalty that unites one man to another, the pride one must take in his work and a job well done, the innate generosity of most who populate his communities, and the vital relationship between a man and a woman in making a better life.