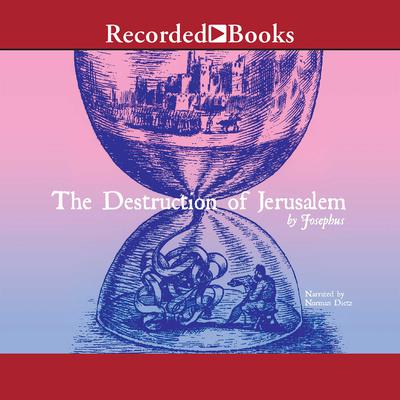 The Destruction of Jerusalem: Excerpts

By Josephus
Read by Norman Dietz

The writings of Josephus contain one of the few historical accounts we have of the wars of the Jews and the first destruction of Jerusalem by Titus during the Roman occupation of Palestine in 70 A.D. This recording includes selections from The Wars of the Jews, written by Josephus during the reign of Vespasian. It features the arrival of the Roman army outside the city; a description of the city's magnificent temple and fortifications; details concerning the famine and its effects on the populace; the burning of the temple; and the siege of Masada.

Flavius Josephus (c. AD 37–100) was born to an aristocratic Jewish family, served as a priest, and later became the commander of Jewish forces in Galilee following the revolt against Rome that began AD 66. Captured by the Romans, Josephus spent his later life in Rome under the patronage of the Roman emperors where he composed his history of the Jewish people and his account of the Jewish war that led to the destruction of Jerusalem and the Temple in AD 70.