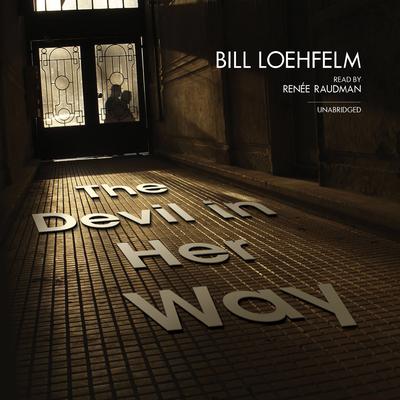 The Devil in Her Way

When Maureen Coughlin first appeared in The Devil She Knows, the New Orleans Times-Picayune called her "unforgettable" and "the character of the year." Booklist named The Devil She Knows one of 2011's ten best thrillers and declared Maureen "as compelling a character as this reviewer expects to see this year."

Now she's back in Bill Loehfelm's new thriller, The Devil in Her Way, and her life has changed in more ways than one: she's starting over in New Orleans as a newly minted member of the police force.

Kicking off her final week of field training, Maureen takes a punch from a panicked suspect bursting out of an apartment. Her training officer laughs it off, and the incident even yields a small victory: the cops recover a stash of pot and guns. But out on the street, on the fringes of the action, Maureen sees something sinister transpire between two neighborhood boys that leaves her shaken, and she knows there's more to the story than she's seen. As we follow Maureen's dangerous hunt for answers, Loehfelm leads us around New Orleans' most hidden corners and into its darkest outposts.

Bill Loehfelm is the real deal—a lauded thriller writer in the modern tradition of Dennis Lehane, Richard Price, and Michael Connelly. He knows the voices of his city. Like Lehane's Boston, Price's New York City, or Connelly's Los Angeles, Loehfelm's New Orleans leaps off the page, as vibrant, flawed, and unruly as his reborn, fire-hearted protagonist. In The Devil in Her Way, Loehfelm's talents flourish, and the result is a ruthless and propulsive thriller.

“The Devil in Her Way is not only Bill Loehfelm’s best book yet—it may just be the best mystery novel to come out of post-Katrina New Orleans since James Lee Burke’s The Tin Roof Blowdown. I can offer no higher praise than to say that I finished it and wanted to read more. A gem.” —John Connolly, New York Times bestselling author
“Bill Loehfelm’s razor-sharp The Devil in Her Way is everything you want a crime novel to be: morally twisty, richly textured, and filled with soul. And perhaps its greatest gift is the battered-but-not-broken Maureen Coughlin, a hero with whom we will go anywhere.” —Megan Abbott, author of Dare Me
“Like his creation, Loehfelm grew up in Staten Island and now lives in New Orleans, and his beautifully written novels excel at capturing the sounds, smells, and rhythms of both places to perfection…Post-Katrina New Orleans, with its thriving French Quarter, its still-ruined neighborhoods, its scandal-riddled police force, and its often obnoxious tourists, has been the setting for a couple of outstanding crime novels, including James Lee Burke’s The Tin Roof Blowdown and Sara Gran’s quirky Claire DeWitt and the City of the Dead. Loehfelm’s The Devil in Her Way measures up to that standard and then some.” —Associated Press
“Punches are flying from page one of this electric thriller…Maureen was an unwitting player in a scandal when she first appeared in The Devil She Knows as a Staten Island waitress wrapped up in the murder of her boss. Now, a book later and transported to her beat training in New Orleans, she’s tougher, grittier, and more focused. Loehfelm jumps on this early and shows us a hardened Maureen rolling with the punches, fueled by an ambition to be the best cop she can. Maureen’s history of victimization and her winding journey through a living New Orleans mean there’s more at work here than a static cop drama.” —Daily Beast
“In the end, the tragedy at the center of The Devil in Her Way is almost a quotidian one for New Orleans—just another day in the life. Loehfelm’s storytelling shines amid the muted action and the nuance: Maureen gets to know the city she’s up against and gets a little further along in getting to know herself…Whatever happens, the story of Maureen Coughlin in New Orleans—the most engaging cop to battle the bad guys of the Crescent City since James Lee Burke’s Dave Robicheaux—has just begun.” —Times-Picayune
“Excellent…Loehfelm meshes graceful prose with edgy suspense and an authentic view of New Orleans’ myriad neighborhoods, bars, and restaurants, where a ‘Café du Monde frozen au lait’ is ‘the closest thing in this world to ambrosia.’” —Publishers Weekly (starred review)
“Previously, Loehfelm made New York’s least-known borough, Staten Island, a genuinely compelling character. Incrementally, he does even more with New Orleans…His portrait of the city and its residents is tragic, elegaic, hopeful, and even loving. Crime aficionados will love The Devil in Her Way, and librarians should consider recommending it to any reader who seeks wonderfully drawn, complicated, deeply human characters and a brilliant sense of place.” —Booklist (starred review)
“The Devil in Her Way has it all: rapid-fire pacing, dialogue that crackles, an artful depiction of the streets of New Orleans, and—in Maureen Coughlin—an utterly authentic, memorable protagonist. Bill Loehfelm is a terrific writer.” —Alafair Burke, author of Never Tell
“Bill Loehfelm shows us a deep, gritty New Orleans, far from the tourists. Seen through the eyes of a rookie cop, The Devil in Her Way is a story told in arrestingly beautiful prose, full of murder, mayhem, and sno-balls. I love this book and can’t wait for the next.” —Sara Gran, author of Come Closer

Bill Loehfelm was born in Brooklyn and grew up on Staten Island. In 1997 he moved to New Orleans. He is the author of the novels Fresh Kills, which won an Amazon Breakthrough Novel Award, and Bloodroot. He lives in New Orleans’ Garden District with his wife, writer A. C. Lambeth.