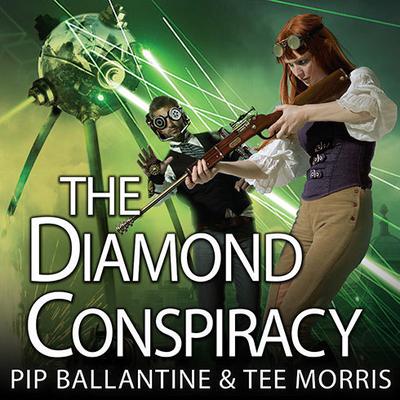 By Pip Ballantine and Tee Morris
Read by James Langton

Having narrowly escaped the electrifying machinations of Thomas Edison, Books and Braun are looking forward to a relaxing and possibly romantic voyage home. But when Braun's emergency signal goes off, all thoughts of recreation vanish. Braun's street-wise team of child informants, the Ministry Seven, is in grave peril, and Books and Braun must return to England immediately.
But when the intrepid agents finally arrive in London, the situation is even more dire than they imagined. The Ministry has been disavowed, and the Department of Imperial Inconveniences has been called in to decommission its agents in a most deadly fashion. The plan reeks of the Maestro's dastardly scheming. Only, this time, he has a dangerous new ally—a duplicitous doctor whose pernicious poisons have infected the highest levels of society, reaching even the Queen herself.

Philippa “Pip” Ballantine is a writer, podcaster, and librarian. She first earned a BA in English literature and political science and later a BA in library and information science. In 2006 she became New Zealand’s first podcast novelist, and she has voiced and produced Weaver’s Web, Chasing the Bard, Weather Child, and Digital Magic as podiobooks. Her podcasts have been shortlisted for the Parsec Awards and have won a Sir Julius Vogel award.

Tee Morris is the author of The Case of the Singing Sword and coauthor, with Lisa Lee, of Morevi: The Chronicles of Rafe and Askana. He has also published several nonfiction titles, including Podcasting for Dummies, Sams Teach Yourself Twitter in 10 Minutes, and All a Twitter.