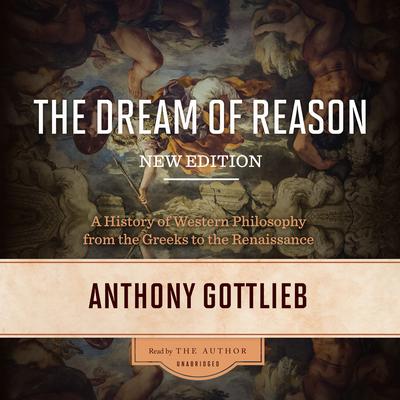 The Dream of Reason, New Edition: A History of Western Philosophy from the Greeks to the Renaissance

Already a classic, this landmark study of early Western thought now appears in a new edition with expanded coverage of the Middle Ages.

In The Dream of Reason, Anthony Gottlieb looks afresh at the writings of the great thinkers, questions much of conventional wisdom, and explains his findings with unbridled brilliance and clarity. From the pre-Socratic philosophers through the celebrated days of Socrates, Plato, and Aristotle, up to Renaissance visionaries like Erasmus and Bacon, philosophy emerges here as a phenomenon unconfined by any one discipline. Indeed, as Gottlieb explains, its most revolutionary breakthroughs in the natural and social sciences have repeatedly been co-opted by other branches of knowledge, leading to the illusion that philosophers never make any progress.

From the physics of angels to Umberto Eco’s The Name of the Rose, Gottlieb builds through example and anecdote a vivid portrait of the human drive for understanding. After finishing The Dream of Reason, listeners will be graced with a fresh appreciation of the philosophical quest, its entertaining and bizarre byways, and its influence on every aspect of life.

“[Gottlieb] writes with fluency and lucidity, with a gift for making even difficult matters seem comprehensible.” —New York Times
“Gottlieb is as enjoyable as he is intellectually stimulating.” —Los Angeles Times
“Gottlieb’s elegant survey brings a breath of fresh air.” —Publishers Weekly