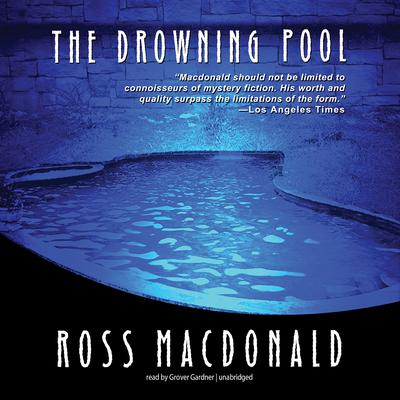 When a millionaire matriarch is found floating face down in the family pool, the prime suspects are her good-for-nothing son and his wife, who stand to inherit, as well as a questionable chauffeur and a tycoon of a company trying to get the woman’s property for the oil under it. Private Investigator Lew Archer takes this case in the Los Angeles suburbs and encounters a moral wasteland of corporate greed and family hatred—and sufficient motive for a dozen murders.

“Fast moving, smoothly written, first-rate whodunit of the hard-boiled school.” —New York Times Book Review
“[Grover Gardner]’s narration perfectly captures Archer’s world-weary persona and is by turns crisp, sardonic, and wry. He shows us the feeling behind Archer’s mask of disengagement and capably handles the female characters with softer tones. The well-drawn characters involve the listener, and only references to prices and technology remind us that the story features a different time.” —AudioFile
“Macdonald picked up the baton dropped by Raymond Chandler and Dashiell Hammett and took the genre to new heights…The Drowning Pool returns to the virtues that are the hallmarks of Macdonald’s work: complex and compelling plotting, psychological depth, just enough mayhem, and highly economical prose that routinely rises to something near poetry.” —Amazon.com
“Archer solves crimes with the instincts of a psychologist and the conscience of a priest, and the mid-twentieth-century Southern California setting is a wonderful ride in the Wayback Machine.” —Los Angeles Times, praise for the series
“The plots involve murder, deceit, blackmail, sex, and all those other goodies that make for great crime stories.” —Library Journal, praise for the series
“Ross Macdonald remains the grandmaster, taking the crime novel to new heights by imbuing it with psychological resonance, complexity of story, and richness of style that remain awe-inspiring. Those of us in his wake owe him a debt that can never be paid.” —Jonathan Kellerman, New York Times bestselling author, praise for the author