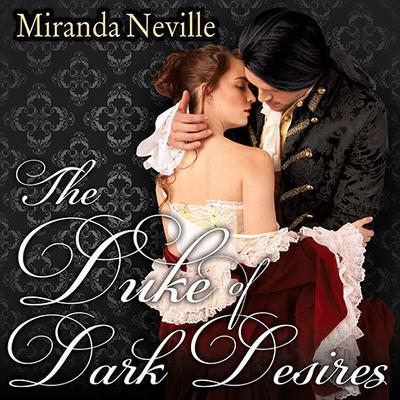 The Duke of Dark Desires

Rebellious Julian Fortescue never expected to inherit a dukedom, nor to find himself guardian to three young half-sisters. Now in the market for a governess, he lays eyes on Jane Grey and knows immediately she is qualified—to become his mistress. Yet the alluring woman appears impervious to him. Lady Jeanne de Falleron didn't seek a position as a governess simply to fall into bed with the Duke of Denford. Under the alias of Jane Grey, she must learn which of the duke's relatives is responsible for the death of her family—and take her revenge. She certainly can't afford the distraction of her darkly irresistible employer, or the smoldering desire he ignites within her. But as Jane discovers more clues about the villain she seeks, she's faced with a possibility more disturbing than her growing feelings for Julian: What will she do if the man she loves is also the man she's sworn to kill? Contains mature themes.

Shaun Grindell's rich, vibrant voice resonates as the handsome, rakish Duke. —AudioFile
“Readers of The Wild Quartet series will recall the tortured Duke of Denford just enough to be intrigued by his tale of redemption and revenge…as the characters move from darkness into the light of love.” —RT Book Reviews
“A smart, determined French émigré and a reluctant, guilt-ridden duke find love and a few surprising answers in this densely plotted, passionate tale that is enhanced by a dash of danger and a lively trio of girls who will eventually merit their own stories.” —Library Journal
“At the heart of the story is the Marquis de Falleron’s unrivaled art collection, which Julian is waiting to retrieve from its hiding place in Belgium. The story is further strengthened by the Duke’s three sisters. Fenella, the middle sister, is a perfect depiction of a troubled young woman in a world that values looks over brains. The main characters’ appreciation of art adds color to the story…about falling in love with the enemy.” —Kirkus Reviews
“Shaun Grindell’s rich, vibrant voice resonates as the handsome, rakish Duke. Grindell is equally adroit in his portrayal of the Duke’s Irish half-siblings, his flighty mother, and the demure but determined Jane. Grindell’s portrayals of French aristocrats and British members of the ton are also well crafted.” —AudioFile

Miranda Neville is the author of the Burgundy Club series and the novel Never Resist Temptation. She has also had novellas published in three anthologies, including At the Duke’s Wedding. She grew up in England, loving the books of Georgette Heyer and other historical romances. She now lives in Vermont with her daughter and her cat.