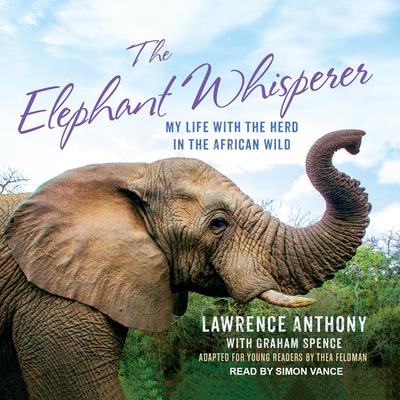 The Elephant Whisperer (Young Readers Adaptation): My Life with the Herd in the African Wild

By Lawrence Anthony  and Graham Spence
Read by Simon Vance

When South African conservationist Lawrence Anthony was asked to accept a herd of "rogue" wild elephants on his Thula Thula game reserve in Zululand, his common sense told him to refuse. But he was the herd's last chance of survival: they would be killed if he wouldn't take them.

In order to save their lives, Anthony took them in. In the years that followed he became a part of their family. And as he battled to create a bond with the elephants, he came to realize that they had a great deal to teach him about life, loyalty, and freedom.

The Elephant Whisperer is a heartwarming, exciting, funny, and sometimes sad account of Anthony's experiences with these huge yet sympathetic creatures. Set against the background of life on an African game reserve, with unforgettable characters and exotic wildlife, it is a delightful book that will appeal to animal lovers and adventurous souls everywhere.

Vance's resonant baritone takes listeners on a wild ride through the South African bush as he gives voice to author Anthony's determined efforts to save a herd of elephants by housing them on Thula Thula, his animal reserve. —Booklist Audio Review

Lawrence Anthony (1950–2012) was an international conservationist, explorer, and adventurer. An acknowledged African wildlife expert, his personal focus was the African elephant. He was a member of the esteemed Explorers Club of New York as well as the National Council of the South African Association for the Advancement of Science. He has been featured in the media, including Reader’s Digest, Smithsonian, Africa Geographic, Men’s Journal, and more.

Graham Spence is the author of The Apocalypse Chase and coauthor, with Lawrence Anthony, of The Last Rhinos and Babylon’s Ark.