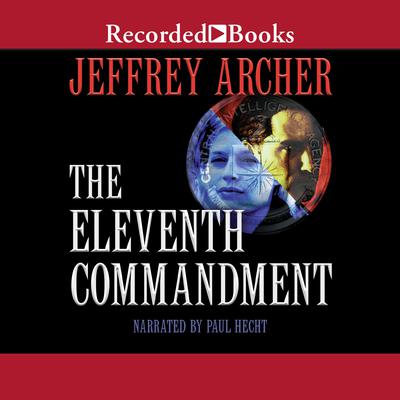 Jeffrey Archer's gripping, critically-acclaimed suspense novels have made him one of the top selling authors of the world. He is also a powerful political figure. A former member of Parliament, Archer is a member of the British House of Lords and Deputy Chairman of England's Conservative Party. In The Eleventh Commandment, he takes you on a whirlwind journey from the inner circles of the CIA to the front lines of international espionage. For 28 years, Connor Fitzgerald has led a double life. Behind the mask of a Maryland Insurance executive, Connor has worked as the CIA's most skilled assassin. But now, as Connor follows orders to close in on the new Russian president, he discovers a far more dangerous threat. His boss, the director of CIA, is plotting against him. The eleventh commandment: "Thou shalt not be caught", becomes a challenge that fills Connor's path with nonstop action and danger. Narrator Paul Hecht captures each of the powerful characters and highlights an unforgettable web of intrigue that will keep you enthralled until the final, surprising twist.

Jeffrey Archer is an author of fiction, nonfiction, and plays, including numerous New York Times bestsellings, of which three made the #1 bestsellers spot. He was educated at Oxford University. He served five years as a member of the British parliament in the House of Commons and has served twenty-seven years as a member of the House of Lords. Now published in 97 countries and more than 37 languages, all of his novels and short story collections—including Kane & Abel, Only Time Will Tell and This Was a Man—have been international bestsellers.