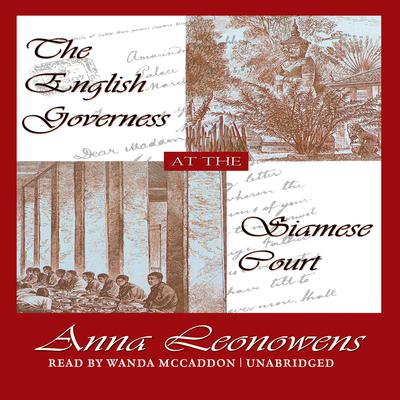 The English Governess at the Siamese Court: Recollections of Six Years in the Royal Palace at Bangkok

This 1870 memoir, which was the basis for the musical The King and I, vividly recounts the experiences of Anna Harriette Leonowens, who served as a governess for the sixty-plus children of King Mongkut of Siam and as translator and scribe for the King himself. Bright, young, and energetic, Leonowens was well-suited to her role, and her writings convey a heartfelt interest in the lives, legends, and languages of Siam’s rich and poor.

She also tells of how she and the king often disagreed on matters domestic—this was the first time King Mongkut had met a woman who dared to contradict him, and the governess found the very idea of male domination intolerable. Her exchanges with His Majesty on topics like grammar, charity, slavery, politics, and religion add much to her diary’s rich, cross-cultural spirit and its East-meets-West appeal.

“[Wanda McCaddon] has a lovely voice and she brings to the reading an exuberance that matches Anna’s writing style exactly. I was particularly pleased at [McCaddon’s] ability to pronounce the various Siamese names accurately and seamlessly.” —Large Print Reviews
“Recounts of and interactions with the royal family are delightful…[McCaddon] keeps her tone light and humorous.” —AudioFile
“[McCaddon’s] expressive reading breathes life into [The English Governess at the Siamese Court].” —Booklist

Anna Harriette Leonowens (original name Crawford, 1834–1914), was the British writer best known as the governess employed by King Mongkut (Rama IV) of Siam (now Thailand) for the instruction of his children. At an early age Anna went to Asia, and there she married Major Thomas Lewis Leonowens of the Indian army. After the major died in 1858, she lived in Singapore with her two children until she was invited by King Mongkut in 1862 to serve as governess to the royal children. For five years she was part of the royal household in Bangkok. After leaving Siam she wrote two books, The English Governess at the Siamese Court (1870) and The Romance of the Harem (1872).