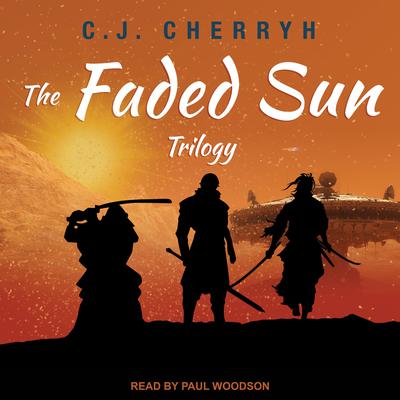 All three books in C. J. Cherryh's epic The Faded Sun trilogy, Kesrith, Shon'jir, and Kutath, collected in one volume.

They were the mri—tall, secretive, bound by honor and the rigid dictates of their society. For aeons this golden-skinned, golden-eyed race had provided the universe mercenary soldiers of almost unimaginable ability.

But now the mri have faced an enemy unlike any other—an enemy whose only way of war is widespread destruction. These "humans" are mass fighters, creatures of the herb, and the mri have been slaughtered like animals. Now, in the aftermath of war, the mri face extinction.

It will be up to three individuals to save whatever remains of this devastated race: a warrior—one of the last survivors of his kind; a priestess of this honorable people; and a lone human—a man sworn to aid the enemy of his own kind. Can they retrace the galaxy-wide path of this nomadic race back through millennia to reclaim the ancient world that first gave them life?

C. J. Cherryh planned to write since the age of ten. When she was older, she learned to use a typewriter while triple-majoring in Classics, Latin, and Greek. With more than seventy books to her credit, and the winner of three Hugo Awards, she is one of the most prolific and highly respected authors in the science fiction field. Cherryh has been named a Damon Knight Memorial Grand Master by the Science Fiction Writers of America.