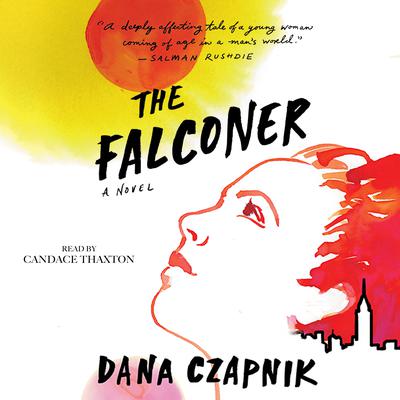 The Falconer: A Novel

“A novel of huge heart and fierce intelligence. It has restored my faith in pretty much everything.” —Ann Patchett, #1 New York Times bestselling author of Commonwealth

In this “frank, bittersweet coming-of-age story that crackles with raw adolescent energy, fresh-cut prose, and a kinetic sense of place” (Entertainment Weekly), a teenaged tomboy explores love, growing up, and New York City in the early 1990s.

New York, 1993. Street-smart seventeen-year-old Lucy Adler is often the only girl on the public basketball courts. Lucy’s inner life is a contradiction. She’s by turns quixotic and cynical, insecure and self-possessed, and, despite herself, is in unrequited love with her best friend and pickup teammate, Percy, the rebellious son of a prominent New York family.

As Lucy begins to question accepted notions of success, bristling against her own hunger for male approval, she is drawn into the world of a pair of provocative feminist artists living in what remains of New York’s bohemia.

Told with wit and pathos, The Falconer is at once a novel of ideas, a portrait of a time and place, and an ode to the obsessions of youth. In her critically acclaimed debut, Dana Czapnik captures the voice of an unforgettable modern literary heroine, a young woman in the first flush of freedom.

[An] electric debut novel… Lucy’s fierce first-person point of view is as confident and fearless as she is on the court; she narrates her story with the immediacy and sharpness of a sports commentator, mixed with the pathos and wisdom of a perceptive adolescent charting the perils of her senior year of high school… Reader, beware: Spending time with Lucy is unapologetic fun, and heartbreak, and awe as well. —Chloe Malle, New York Times Book Review  “There's so much more going on in The Falconer than "just" basketball, but as folks I know who love the game tell me, this seemingly speedy game slows down for good players: They can see everything happening on the court — every player, every movement, every possibility — with startling clarity. In The Falconer, Dana Czapnik displays this same gift: In bringing Lucy to life, she sees the whole game.
“A deeply affecting tale of a young woman coming of age in a man’s world. All the characters feel authentic and unique, and its protagonist, Lucy Adler, jumps right off the page. I’ve never read a character quite like her in fiction - a deeply intelligent basketball player with a sharp, incisive take on the changing city and country in which she lives. Lucy’s journey into adulthood will be especially resonant with today’s readers.” —Salman Rushdie, #1 New York Times bestselling author
“Smart, tough, an extraordinary athlete, Lucy Adler teeters, zealous and baffled, on the cusp of womanhood. Dana Czapnik’s frank heroine has a voice, and a perspective, you won’t soon forget. The Falconer is an exhilarating debut.” —Claire Messud, author of The Burning Girl and The Woman Upstairs
“Meet Lucy Adler. As I read The Falconer, I felt like I’d found a literary cousin of Holden Caulfield—if Holden were a straight-shooting, hip-hop-listening, court-dominating, seventeen-year-old Jewish-Italian girl. Dana Czapnik has crafted a wholly original coming-of-age story. In basketball terms, The Falconer is a fearless three-point shot.” —Chloe Benjamin, author of The Immortalists and The Anatomy of Dreams
“Told with a poet’s ear and a basketball player’s eye and reflexes, The Falconer is an extraordinary book. Czapnik is refreshingly honest and open-eyed about the way money, gender and the demands of the body steer the overwhelming longings and frustrations of being a young woman growing up in the city. Every detail feels true and important, every small observation tells a larger story. A wonderful new talent.” —Rivka Galchen, author of Atmospheric Disturbances and American Innovations
“An unsentimental education in all that is urgent, soulful and intimate. As much the portrait of an era as it is the portrait of an adolescence, this is a crossover novel that will thrill readers of all generations. The Falconer captures the grueling, exhilarating pathos of one woman’s quest to become whole. A wonderful debut.” —Colum McCann, author of Thirteen Ways of Looking and Let The Great World Spin

Dana Czapnik is a 2018 NYSCA/NYFA Artist Fellow in Fiction from The New York Foundation for the Arts. In 2017, she was awarded an Emerging Writers Fellowship from the Center for Fiction. Czapnik earned her MFA at Hunter College where she was recognized with a Hertog Fellowship. She’s spent most of her career on the editorial side of professional sports including stints at ESPN the Magazine, the United States Tennis Association, and the Arena Football League. A native New Yorker, she lives in Manhattan with her husband and son.