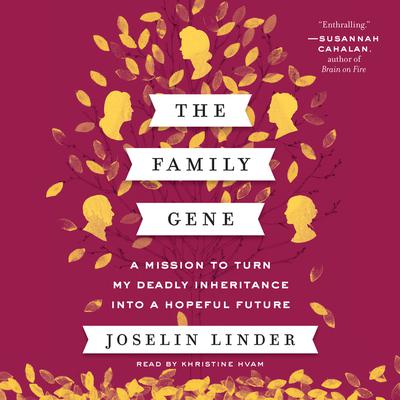 The Family Gene: A Mission to Turn My Deadly Inheritance Into a Hopeful Future

When Joselin Linder was in her twenties, her legs started to swell. She thought little of it, until her health problems started to compound in ways that baffled her doctors. Diagnosed with extreme liver blockage and dangerous levels of lymph fluid, Joselin turned to the most similar case she could think of—her father’s.

Joselin compared the medical chart of her father—who had died of an undiagnosed disease, ten years prior—-with that of an uncle who had died under similarly strange circumstances. Delving further into the past, she discovered her that her great grandmother had symptoms like hers, and she recognized that she was dealing with something more than a fluke. Whatever had killed her father, uncle, and great-grandmother was likely genetic, and the clock was ticking for the family members of her own generation.

Setting out to build a more complete picture of the disease that haunted her family, she approached Dr. Christine “Kricket” Seidman, the head of a group of world-class genetic researchers at Harvard Medical School and a colleague of her late father’s, for help. Dr. Seidman has been attempting the map the faulty gene for seventeen years and has confirmed not only that Joselin’s symptoms are genetic, but that Joselin’s family is this disease’s founder population—a group of people experiencing the baffling symptoms of a brand new mutation. Here, Joselin she tells the story of their gene: the lives it claimed and the future of genetics it foretells.

Digging into family records and medical history, interviews with family and friends and her own experiences with Harvard doctors, Joselin pieces together the story of a deadly gene to write a gripping and unforgettable exploration of family, history, love, and mortality. A compelling story of survival and perseverance, THE FAMILY GENE is an important story of a young woman reckoning with her father’s death, her own mortality, and her ethical obligations to herself, family, and society.

“The science is enthralling, the narrative’s race-against-the-clock tension is nail-biting, but at its core, this book is about the remarkable bond of family.” —Susannah Cahalan, New York Times bestselling author
“Three of the most powerful forces in life are family, love, and science. Joselin Linder, through a combination of the fates, found herself in a position to tell a first-person tale of how those forces can intersect, and with heart and insight she does so in a way that will make you ponder many things deep into the night.” —Bob Greene, New York Times bestselling author
“Linder’s writing is magnetic…Leaving us hopeful, heartbroken, and inspired all in the same breath.” —Abby Sher, author of Amen, Amen, Amen

Joselin Linder is a writer living in Brooklyn. She has contributed to NPR’s This American Life and Morning Edition, among other outlets.