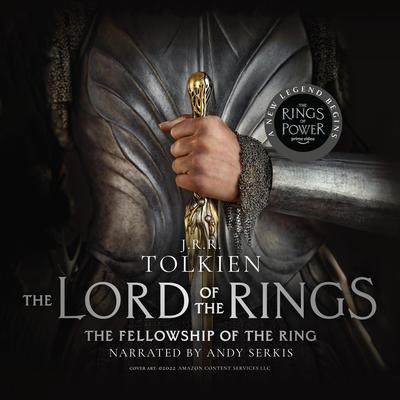 The Fellowship of the Ring

The Lord of the Rings Trilogy: Book 1

THE FIRST PART OF J.R.R. TOLKIEN’S EPIC MASTERPIECE, THE LORD OF THE RINGS In a quiet village in the Shire, young Frodo Baggins is about to receive a gift that will change his life forever. Thought lost centuries ago, it is the One Ring, an object of terrifying power once used by the Dark Lord to enslave Middle-earth. Now darkness is rising, and Frodo must travel deep into the Dark Lord’s realm, to the one place the Ring can be destroyed: Mount Doom. The journey will test Frodo’s courage, his friendships and his heart. Because the Ring corrupts all who bear it—can Frodo destroy it, or will it destroy him?This brand-new unabridged recording is narrated by the acclaimed actor, director and author, Andy Serkis.

“A stunning performance…This unabridged production of Tolkien's fantasy classic — including front matter on Hobbit lore and The Hobbit — is lengthy but never dull, thanks to Serkis's dynamic interpretation…Serkis creates an impressive assortment of fully developed characters, infusing each voice with distinct qualities — even when singing — giving the impression of a full-cast narration. Serkis is a remarkably gifted storyteller, and the result is captivating in every respect…Winner of the AudioFile Earphones Award.” —AudioFile