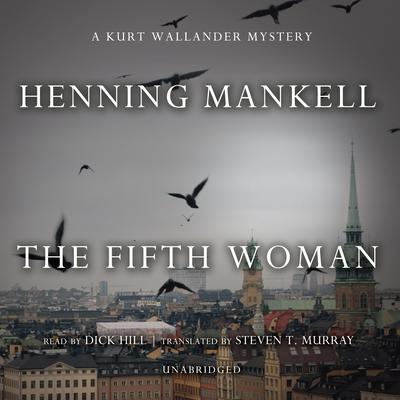 In an African convent, four nuns and an unidentified fifth woman are brutally murdered, and the death of the unknown woman is covered up by the local police. A year later in Sweden, Inspector Kurt Wallander is baffled and appalled by two strange murders. Holger Eriksson, a retired car dealer and bird watcher, is impaled on sharpened bamboo poles in a ditch behind his secluded home, while the body of a missing florist is discovered strangled and tied to a tree. The only clues Wallander has to go on are a skull, a diary, and a photo of three men. What ensues is a case that will test Wallander’s strength and patience, for in order to solve these murders he will need to uncover their elusive connection to the earlier unsolved murder in Africa of the fifth woman.

“Captures listeners with a suspenseful plot and an evocative setting…Hill’s narration lends suspense, humor, and terrific character delineation of Wallander and his cohorts.” —AudioFile
“[The Fifth Woman’s] intricate plotting, chilling psychological divination, and thrilling police procedural are all seamlessly translated...Highly recommended.” —Library Journal
“Achieves a deeply satisfying density of plot and characterization.” —Baltimore Sun
“A marvelously told mystery…You can’t put it down, but you won’t want to finish it either.” —Austin American-Statesman
“A scary and cunning tale…Here is a police procedural in which the main procedure is thought.” —Rocky Mountain News