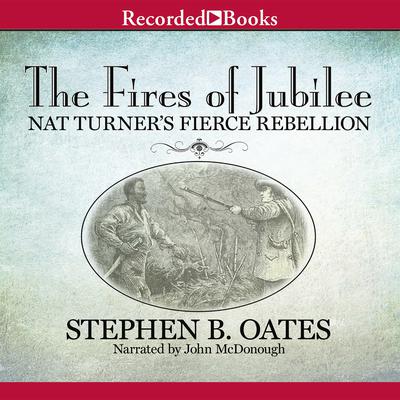 By Stephen B. Oates
Read by John McDonough

Prize-winning biographer Stephen B. Oates has authored 13 insightful portraits of notable Americans. The Fires of Jubilee is the dramatic portrayal of Nat Turner, the enigmatic visionary who led a bloody slave rebellion in Virginia in 1831. Nat Turner spent an idyllic childhood believing that he was destined for great things. In his 13th year, however, his white playmates went off to school, and he was forced to endless labor in the cotton fields. Amid the brutality of slavery and the turmoil of the era, he became a prophet to his oppressed people, and he began to see signs and visions of Judgment Day. His visions culminated in the bloody massacre of more than sixty white people and the public hanging of about two hundred blacks that resulted. Nat Turner's rebellion proved itself to be crucial as a precursor of the Civil War. History buffs and students of human nature alike will appreciate the drama of Stephen Oates' gripping portrayal of this charismatic slave and the society that created him.

Stephen B. Oates is the author of sixteen books, including The Approaching Fury; With Malice Toward None: A Life of Abraham Lincoln, and Let the Trumpet Sound: A Life of Martin Luther King Jr. He has won the Christopher Award and the Robert F. Kennedy Memorial Book Award for his work. Oates was a consultant and commentator in Ken Burns’s Civil War series on PBS, and is a recipient of the Nevins-Freeman Award of the Chicago Civil War Round Table for lifetime achievement in the field of Civil War studies. He is a professor emeritus at the University of Massachusetts, Amherst.