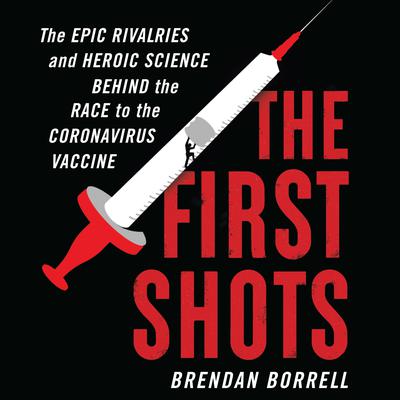 The First Shots: The Epic Rivalries and Heroic Science Behind the Race to the Coronavirus Vaccine

The full inside story of the high-stakes, global race for the lifesaving vaccine to end the pandemic

Heroic science. Chaotic politics. Billionaire entrepreneurs. Award-winning journalist Brendan Borrell brings the defining story of our times alive through compulsively readable, first-time reporting on the players leading the fight against a vicious virus. The First Shots, soon to be the subject of an HBO limited series with superstar director and producer Adam McKay (Succession, Vice, The Big Short), draws on exclusive, high-level access to weave together the intense vaccine-race conflicts among hard-driving, heroic scientists and the epic rivalries among Washington power players that shaped 18 months of fear, resolve, and triumph.

From infectious disease expert Michael Callahan, an American doctor secretly on the ground in Wuhan in January 2020 to gauge the terrifying ravages of Disease X; to Robert (Dr. Bob) Kadlec, one of Operation Warp Speed’s architects, whose audacious plans for the American people run straight into the buzz saw of the Trump White House factions; to Stéphane Bancel of upstart Moderna Therapeutics going toe-to-toe with pharma behemoth Pfizer, The First Shots lays bare, in a way we have not seen, the full stunning story behind the medical science “moon shot” of our lifetimes.

“In his vivid account of the tumultuous journey toward developing a coronavirus vaccine, Brendan Borrell offers immediate and hugely valuable insights.” —Marty Baron, Executive Editor (retired) of The Washington Post
“A riveting, sometimes startling, sometimes chilling page-turner of a book.” —Deborah Blum, Pulitzer Prize–winning author
“An astonishingly powerful synthesis of intelligence, exertion, and speed…You will learn something new on every page of The First Shots.”  —Dan Fagin, Pulitzer Prize–winning author