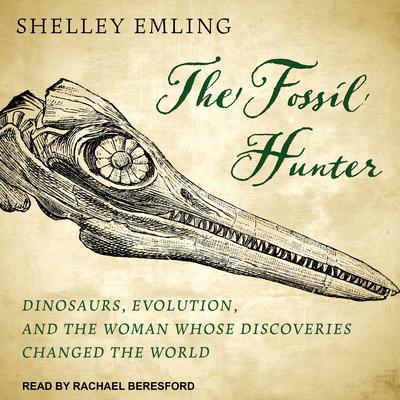 The Fossil Hunter: Dinosaurs, Evolution, and the Woman Whose Discoveries Changed the World

Mary Anning was only twelve years old when, in 1811, she discovered the first dinosaur skeleton—of an ichthyosaur—while fossil hunting on the cliffs of Lyme Regis, England. Until Mary's incredible discovery, it was widely believed that animals did not become extinct. The child of a poor family, Mary became a fossil hunter, inspiring the tongue-twister, "She Sells Sea Shells by the Seashore." She attracted the attention of fossil collectors and eventually the scientific world. Once news of the fossils reached the halls of academia, it became impossible to ignore the truth. Mary's peculiar finds helped lay the groundwork for Charles Darwin's theory of evolution, laid out in his On the Origin of Species. Darwin drew on Mary's fossilized creatures as irrefutable evidence that life in the past was nothing like life in the present.

A story worthy of Dickens, The Fossil Hunter chronicles the life of this young girl, who became a world-renowned paleontologist. Dickens himself said of Mary: "The carpenter's daughter has won a name for herself, and deserved to win it."

Here at last, Shelley Emling returns Mary Anning, of whom Stephen J. Gould remarked, is "probably the most important unsung (or inadequately sung) collecting force in the history of paleontology," to her deserved place in history.

Shelley Emling is a senior editor at AARP.org and editor-in-chief of The Girlfriend from AARP. Previously she was a senior editor at the Huffington Post for five years. She has worked as a foreign correspondent for the Cox Media Group both in Europe and in Latin America for more than twelve years, based in London for eight years. She is the author of several books, including Marie Curie and Her Daughters, Setting the World on Fire, Your Guide to Retiring in Mexico, and The Fossil Hunter.