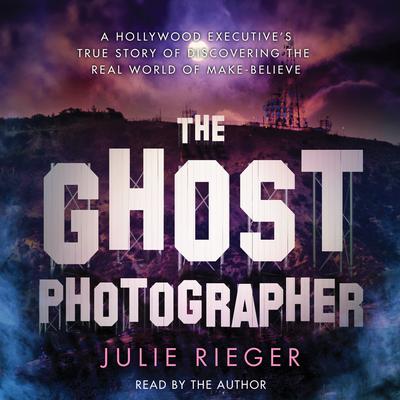 The Ghost Photographer: A Hollywood Executive Discovers the Real World of Make-Believe

“A good primer on getting into the psychic realm, this is also, ultimately, a story of unconditional love and healing by a woman you might just want to have a drink with.” —Booklist

This inspirational memoir, told with uncensored Southern wit and guidance, recounts the story of a Hollywood film executive who journeys through the cosmic wilderness and, against all odds, discovers psychic superpowers that radically transform her life.

As a senior executive at one of the world’s largest movie studios, Julie Rieger spent her days marketing the imaginary stories of ghosts, faeries, superheroes, aliens, and more fantastical creatures. But after the devastating loss of her mother, the world of make-believe became reality when Julie captured her first ghost in a photograph and blew open a door to the Other Side.

The Ghost Photographer chronicles Julie’s wild ride down the spiritual rabbit hole. After a series of unexpected, mind-blowing, and sometimes frightening encounters with the spirit realm, Julie was forced to face this strange awakening, flying in the face of scientific dogma and her own die-hard skepticism. Ultimately, she discovered that what she thought she had lost with the death of her mother—unconditional love—was in fact the greatest superpower one can wield.

In a refreshing departure from traditional supernatural tales, Julie tells her story with bold humor and total candor. Her journey juxtaposes her down-home roots in rural America with the glam of Hollywood and her professional universe of hard, empirical data. As she fine-tunes her psychic abilities and comes to terms with the transformative power of grief, Julie is empowered to fearlessly tell her story, teach others, and invite them to share their own experiences of the paranormal and unexplained. She offers insights into our relationship with the spirit world, prayers and rituals for cleansing and protecting our homes from unwanted ghosts, and guidance on how to develop our intuition and sixth sense.

“Get ready to read a book that can change your life.” —Dannion Brinkley, New York Times bestselling author

Julie Rieger is the award-winning executive vice president of media at Twentieth Century Fox, responsible for marketing such notable films as Avatar, Deadpool, The Fault in Our Stars, and The Book Thief. An Oklahoma native, she now resides in Sherman Oaks, California, with her wife, dog, and a growing group of ghostly friends.