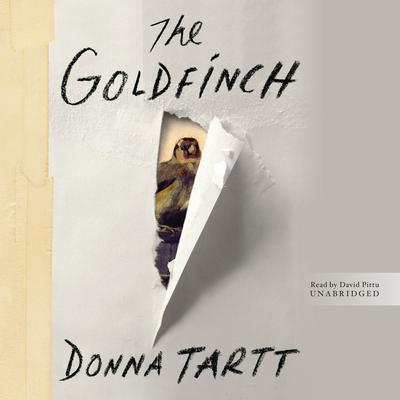 The Goldfinch: A Novel (Pulitzer Prize for Fiction)

Winner of the 2014 Pulitzer Prize for Fiction

A BookRiot Pick of the Most Perfect Audiobooks Ever

Winner of the 2014 Audie® Award for Best Literary Fiction Narration

Winner of the 2014 Audie Award for Best Solo Narration-Male

A 2014 Carnegie Medal for Literature Finalist in Fiction

A 2013 Chicago Tribune Book of the Year

A 2014 ALA Notable Book for Adult Ficiton

One of Kirkus Reviews Best Books of 2013

A 2014 LibraryReads Favorites of the Favorites selection

A young boy in New York City, Theo Decker, miraculously survives an explosion that takes the life of his mother. Alone and determined to avoid being taken in by the city as an orphan, Theo scrambles between nights in friends’ apartments and on the city streets. He becomes entranced by the one thing that reminds him of his mother: a small, mysteriously captivating painting that soon draws Theo into the art underworld.

Composed with the skills of a master, The Goldfinch is a haunted odyssey through present-day America. It is a story of loss and obsession, survival and self-invention, and the enormous power of art.

“The Goldfinch is a rarity that comes along perhaps half a dozen times per decade, a smartly written literary novel that connects with the heart as well as the mind.” —Stephen King, #1 New York Times bestselling author
“A masterpiece of characterization, plot, technical artistry combined with exquisite, heartbreaking understanding of loss, love, and art.” —Simon Sebag Montefiore, New York Times bestselling author
“A novel that pulls together all Ms. Tartt’s remarkable storytelling talents into a rapturous, symphonic whole and reminds the reader of the immersive, stay-up-all-night pleasures of reading.” —New York Times
“It’s like Tartt wrote this book specifically so that David Pittu could read it. If I could only recommend one audiobook for the rest of my life, this would be it.” —BookRiot (starred audio review)
“Narrator David Pittu accepts the task of turning this immense volume into an excellent listening experience. Pittu portrays thirteen-year-old orphan Theo Decker with compassion, portraying his growing maturity in this story of grief and suspense…Pittu adds pathos to his depiction of the troubled Theo as he deals with addiction and finds himself in a dance with gangsters and the art world’s darker dealers. Tartt’s enthralling narrative is fully realized by the gifted Pittu.” —AudioFile
“Right from the start we remember why we enjoy Donna Tartt so much: the humming plot and elegant prose; the living, breathing characters; the perfectly captured settings.” —Vanity Fair
“Tartt’s trenchant, defiant, engrossing, and rocketing novel conducts a grand inquiry into the mystery and sorrow of survival, beauty and obsession, and the promise of art.” —Booklist (starred review)
“A long-awaited, elegant meditation on love, memory, and the haunting power of art…A standout.” —Kirkus Reviews (starred review)
“There’s a bewitching urgency to the narration that’s impossible to resist. Theo is magnetic.” —Publishers Weekly

Donna Tartt is the author of The Goldfinch, which was awarded the 2014 Pulitzer Prize for Fiction, as well as the Andrew Carnegie Medal for Excellence in Fiction, as well as other major awards. Her novels The Secret History and The Little Friend have been translated into thirty languages. She was born in Greenwood, Mississippi, and is a graduate of Bennington College.