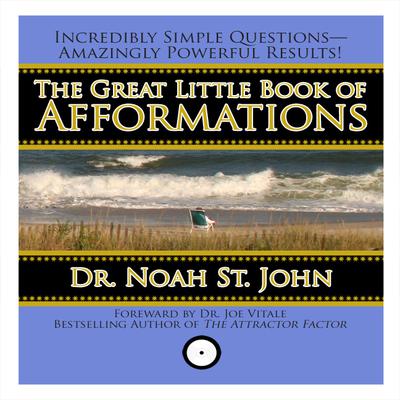 "A refreshing and practical new approach to the idea of positive thinking."   -(Writer's Digest Book Awards) "One of the most significant breakthroughs in the study of success in decades."   -(Jack Canfield) Tired of hearing yourself say things like: "Why is my life such a struggle?" "Why can't I find someone to love?" "Why don't I have enough time (or money)?" Change the questions. Change your life! In this new, updated audio edition of the original award-winning book, you will learn how to transform your life using a simple questioning technique called afformations: empowering questions (not statements) that change what you focus on. And you'll soon find that what you focus on, grows! The author walks you through every area of life, including: Health Wealth Body Image Love and Relationships Work and Career You'll discover new questions that will empower you to have: More control More freedom More abundance ...in every aspect of your life. What are you waiting for?

Noah St. John, PhD, is founder and CEO of the Success Clinic of America LLC, an international success training company. He is the author of Permission to Succeed and a four-book series called The Great Little Book of Afformations, which have been Amazon.com Hot 100 Sellers. He has been a featured guest expert on scores of radio, television, print, and Internet outlets, including CNN Headline News, National Public Radio’s All Things Considered, local ABC, NBC, CBS and Fox Television affiliates, Parade, Woman’s Day, Modern Bride, Los Angeles Business Journal, Chicago Sun-Times, Washington Post, and InStyle.