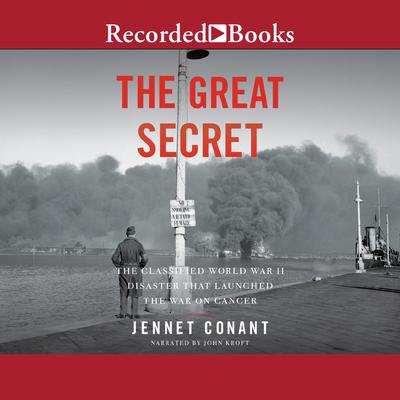 The Great Secret: The Classified World War II Disaster that Launched the War on Cancer

The gripping story of a chemical weapons catastrophe, the cover-up, and how one American Army doctor’s discovery led to the development of the first drug to combat cancer, known today as chemotherapy.

On the night of December 2, 1943, the Luftwaffe bombed a critical Allied port in Bari, Italy, sinking seventeen ships and killing over a thousand servicemen and hundreds of civilians. Caught in the surprise air raid was the John Harvey, an American Liberty ship carrying a top-secret cargo of 2,000 mustard bombs to be used in retaliation if the Germans resorted to gas warfare.

When one young sailor after another began suddenly dying of mysterious symptoms, Lieutenant Colonel Stewart Alexander, a doctor and chemical weapons expert, was dispatched to investigate. He quickly diagnosed mustard gas exposure, but was overruled by British officials determined to cover up the presence of poison gas in the devastating naval disaster, which the press dubbed “little Pearl Harbor.” Prime Minister Winston Churchill and General Dwight D. Eisenhower acted in concert to suppress the truth, insisting the censorship was necessitated by military security.

Alexander defied British port officials and heroically persevered in his investigation. His final report on the Bari casualties was immediately classified, but not before his breakthrough observations about the toxic effects of mustard on white blood cells caught the attention of Colonel Cornelius P. Rhoads—a pioneering physician and research scientist as brilliant as he was arrogant and self-destructive—who recognized that the poison was both a killer and a cure, and ushered in a new era of cancer research led by the Sloan Kettering Institute. Meanwhile, the Bari incident remained cloaked in military secrecy, resulting in lost records, misinformation, and considerable confusion about how a deadly chemical weapon came to be tamed for medical use.

“Well-researched and engrossing…Conant documents the many twists and turns of this little-known story with verve and precision. WWII aficionados and medical history fans will be fascinated.” —Publishers Weekly
“A history that reads like a novel.” —New York Times Book Review
“Conant has uncovered a humdinger of a tale, one that is equal parts war story, conspiracy thriller, and medical mystery. More than anything, The Great Secret shows how the dogged efforts of a handful of scientists were able to turn a wartime tragedy and coverup into one of society’s greatest gifts.” —James M. Scott, Pulitzer Prize finalist and author of Target Tokyo and Rampage