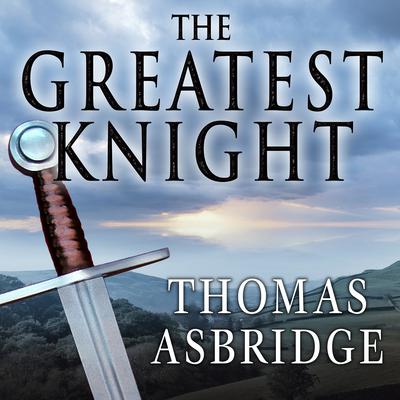 The Greatest Knight: The Remarkable Life of William Marshal, the Power Behind Five English Thrones

In The Greatest Knight, renowned historian Thomas Asbridge draws upon the thirteenth-century biography and an array of other contemporary evidence to present a compelling account of William Marshal's life and times. Asbridge charts the unparalleled rise to prominence of a man bound to a code of honor yet driven by unquenchable ambition. Marshal was the true Lancelot of his era—a peerless warrior and paragon of chivalry. As a five-year-old boy, William was sentenced to execution and led to the gallows, yet this landless younger son survived his brush with death, and went on to train as a medieval knight. Against all odds, Marshal rose through the ranks—serving at the right hand of five English monarchs—to become a celebrated tournament champion, a baron and politician, and, ultimately, regent of the realm. This knight's tale lays bare the brutish realities of medieval warfare and the machinations of royal court, and draws us into the heart of a formative period of our history. It is the story of one remarkable man, the birth of the knightly class to which he belonged, and the forging of the English nation.

“Mr. Asbridge has written a rip-roaring new life of Marshal, which will leave readers hungry…a generally splendid account of a great medieval life.” —Wall Street Journal
Readers seeking a deeper understanding of early tournaments and the origins of chivalry will be pleased. —Library Journal Starred Review
“The Greatest Knight gives us a moving portrait of one man’s struggle, ascent, and final (peaceful) demise.” —Sunday Times (London)
“Asbridge has fashioned a rare and fascinating tale: a biography of a medieval knight told with all the rich detail, dialogue, and action that is usually possible only for figures from later periods. Asbridge is a wonderful guide to the complex politics and history of medieval England.” —Christian Science Monitor
“This blood, guts, gore, and gallantry romp through medieval history, following the great knight William Marshall…is way more fun than it should be.” —New York Post
“England’s greatest knight puts ‘Game of Thrones’ to shame… A riveting new biography…Asbridge takes the reader through an eye-opening account…His account is an entertaining reminder that sometimes, the truth really is better than fiction.” —Daily Beast
“On one level, this is the story of how a second son with few prospects rose to the pinnacle of chivalry, later becoming the most powerful man in England. It is also a story about how medieval knighthood worked; the interlocking web of obligation and fealty, friendship and loyalty that created the fairy-tale world of Arthur and Lancelot. Readers seeking a deeper understanding of early tournaments and the origins of chivalry will be pleased.” —Library Journal (starred review)
“A valuable biography of an important figure in a distant, violent, barely comprehensible era.” —Kirkus Reviews
“Derek Perkins skillfully narrates Asbridge’s history of the exemplary twelfth-century knight…Perkins’ voice has something of the medieval in it, and he easily fills the contours of a narrative that ranges from the manufacture of knight’s armor to its bloody use on the field of battle. Here is Arthurian legend at its core—and one of the year’s true sleepers. Winner of AudioFile Earphones Award.” —AudioFile
“This is medieval history at its very best—a compelling story told by a historian whose knowledge is both thorough and extensive, and whose enthusiasm for the subject rings out on every page.” —Ian Mortimer, historian and bestselling author of The Time Traveller’s Guide to Medieval England

Thomas Asbridge is the author of The Crusades: The War for the Holy Land and The First Crusade: A New History. He earned a BA in ancient and medieval history at Cardiff University and gained his PhD in medieval history at Royal Holloway, University of London. He is the Reader in Medieval History at Queen Mary, University of London. He wrote and presented the landmark three-part documentary series The Crusades for the BBC, filmed on location across the Near East and Europe. He has also appeared in many other internationally broadcast television documentaries and radio programs, and he has worked as a historical consultant for HBO and Company Pictures. Asbridge lives in southern England.