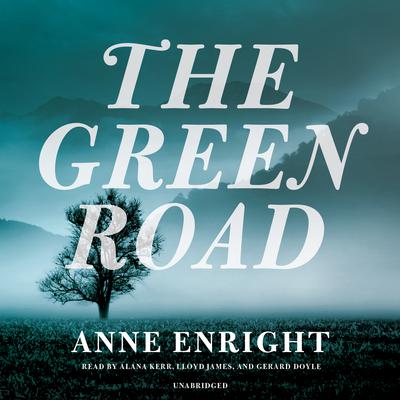 Shortlisted for the 2015 Costa Book Award

From internationally acclaimed, Man Booker Prize–winning author Anne Enright comes a shattering novel set in a small town on Ireland’s Atlantic coast. The Green Road is a tale of family and fracture, compassion and selfishness—a book about the gaps in the human heart and how we strive to fill them.

Spanning thirty years, The Green Road tells the story of Rosaleen, matriarch of the Madigans, a family on the cusp of either coming together or falling irreparably apart. As they grow up, Rosaleen’s four children leave the west of Ireland for lives they could have never imagined in Dublin, New York, and Mali, West Africa. In her early old age their difficult, wonderful mother announces that she’s decided to sell the house and divide the proceeds. Her adult children come back for a last Christmas, with the feeling that their childhoods are being erased, their personal history bought and sold.

A profoundly moving work about a family’s desperate attempt to recover the relationships they’ve lost and forge the ones they never had, The Green Road is Enright’s most mature, accomplished, and unforgettable novel to date.

“An exquisitely drawn case for the possibility of growth, love, and transformation at any age.” —People
“A master of emotional excavation…shows us the beauty even in life’s harsh terrain.” —O, The Oprah Magazine
“A book of brawny prose sheathed in cool intelligence.” —Economist (London)
“Enright masterfully reminds us of the weight of history and family.” —The Guardian (London)
“An impressive novel that bounces its readers through some fairly rocky terrain… Enright writes with authority and confidence not just about her native Ireland but about the AIDS-stricken New York in which Dan is making his way and the poverty-stricken Mali.” —New York Times Book Review
“Arich, capacious story, buoyed by tender humor, something like Anne Tyler with a brogue.” —Washington Post
“Enright’s razor-sharp writing turns every ordinary detail into a weapon, to create a story that cuts right to the bone.” —New York Review of Books
“Alana Kerr uses a light Irish accent to narrate the chapters about the widowed mother and her daughters…Soft-spoken Lloyd James and the gruffer Gerard Doyle narrate the sections about the brothers, one coming to terms with his sexuality and the other an aid worker in Africa.” —AudioFile
“Flawless…This novel is a vibrant family portrait, both pitiless and compassionate, witty and stark.” —Publishers Weekly (starred review)
“Enright trails the Madigans over three decades, illuminating their trials and triumphs as reflective of not only their distinctive personalities and personal interests but also Irish society moving into the modern era of contraception, economic boom and bust, and open homosexuality.” —Booklist (starred review)
“This is prime Enright territory, the fertile soil of home and history, cash and clan…allowing Enright plenty of space to convey her brilliant ear for dialogue, her soft wit, and piercing, poetic sense of life’s larger abstractions.” —Kirkus Reviews (starred review)

Anne Enright is the author of two volumes of stories and several novels, including The Forgotten Waltz and The Gathering, which won the Man Booker Prize.