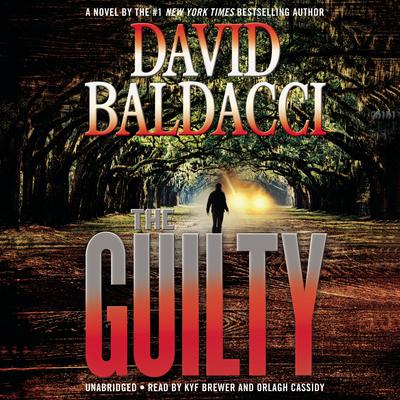 By David Baldacci
Read by Kyf Brewer and Orlagh Cassidy

The Will Robie Series: Book 4

Will Robie is the government's most professional, disciplined, and lethal assassin. He infiltrates the most hostile countries in the world, defeats our enemies' advanced security measures, and eliminates threats before they ever reach our shores.
But now, his skills have left him. Sent overseas on a critical assignment, he fails, unable to pull the trigger. Absent his talents, Robie is a man without a mission, and without a purpose.
To recover what he has lost, Robie must confront what he has tried to forget for over twenty years: his own past.
THE GUILTY
Will Robie escaped his small Gulf Coast hometown of Cantrell, Mississippi, after high school, severing all personal ties, and never looked back. Not once. Not until the unimaginable occurs. His father, Dan Robie, has been arrested and charged with murder.
Father and son haven't spoken or seen each other since the day Robie left town. In that time, Dan Robie--a local attorney and pillar of the community--has been elected town judge. Despite this, most of Cantrell is aligned against Dan. His guilt is assumed.
To make matters worse, Dan has refused to do anything to defend himself. When Robie tries to help, his father responds only with anger and defiance. Could Dan really be guilty?
With the equally formidable Jessica Reel at his side, Robie ignores his father's wishes and begins his own desperate investigation into the case. But Robie is now a stranger to his hometown, an outsider, a man who has forsaken his past and his family. His attempts to save his father are met with distrust and skepticism . . . and violence.
Unlike the missions Robie undertook in the service of his country, where his target was clearly defined, digging into his father's case only reveals more questions. Robie is drawn into the hidden underside of Cantrell, where he must face the unexpected and possibly deadly consequences of the long-ago choices made by father and son. And this time, there may be no escape for either of them.

David Baldacci's latest thriller is not only highly relevant, it is also well timed. And the details seem so real that it's hard not to wonder if the author is an insider; the tone is that authentic. An absolute page-turner, King and Maxwell is Baldacci at the pinnacle of his game. —BookReporter.com
Baldacci has crafted another terrific tale with two great protagonists. Just when the story line seems to veer into familiar areas, Baldacci steers it into another shocking direction. This is the best book yet in the series. —Associated Press on King and Maxwell
Its pace is relentless, and Baldacci's reworking of his perennial theme - absolute power corrupts absolutely - gives the book a sense of urgency and cultural relevance that many thrillers lack. —Richmond Times-Dispatch on The Hit
The best Baldacci novel in years...What makes The Hit live up to its title is the payoff at the novel's end. By then, Baldacci has planted an emotional hook that remains long after readers have turned the last page of the book. —Associated Press on The Hit
Baldacci is a master when it comes to writing about small-town conspiracies and a lone hero who fights against all odds to clean up corruption. The narrative moves slowly, so the reader has a chance to solve the case along with Puller. It might seem straightforward, but the final reveal will surprise even hardcore thriller junkies. —The Washington Post on The Forgotten
Another fast paced page turner that will keep you glued to the couch...by an author who continues to standout in the increasingly crowded thriller field. —Examiner.com on The Forgotten
Baldacci has been on a hot streak for the past few years, and The Target continues the trend. This isn't a garden-variety thriller or even a garden-variety Baldacci. It's among his most exhilarating books yet. —Richmond Times-Dispatch on The Target
Brilliant use of language...vivid supporting characters and numerous sudden and unexpected plot twists...[Baldacci] doesn't let the action sag at any point...In [Chung-Cha], Mr. Baldacci has created one of his most memorable characters. —Pittsburgh Post-Gazette on The Target
“The story sings…Baldacci is a gifted storyteller, and he knows how to keep the pages turning.” —Associated Press
Robie and Reel are complex characters, and anything they do is a pleasure to follow...Baldacci knows how to get readers to turn the pages, and he's in top form here. —Associated Press on The Target
“Baldacci fans will not be disappointed. The action is slam-bang with his trademarked twist. Once past the climax, you’ll find yourself flipping back and rereading to find the clues the author has sprinkled throughout.” —Florida Times-Union
“A fast-moving thriller that will force readers into that ”zone,‘ where you don’t want to put the book down…Whether you are a die-hard fan or a newcomer to his work, you will not be disappointed in The Guilty.” —BookReporter.com
“A first-class thriller…David Baldacci’s four bestselling novels about government assassin Will Robie have straddled that line of edgy, high-concept suspense, augmented with a bit of the political thriller, and deep character studies. In The Guilty, Baldacci takes a different tack with a more personal but just as thrilling tale about Will’s past, giving compelling insight about how he became a man so willing to kill for his country.” —Sun-Sentinel (Florida)
“Two narrators enhance this mystery, the fourth in the Will Robie series, adding clarity to the detailed conversations between the characters. Keith Brewer handles the narrative and male dialogue, capably portraying assassin Robie…[and] gently projects Robie’s hidden Southern accent. Voicing the female dialogue, Orlagh Cassidy provides just enough characterization to differentiate Robie’s steely sidekick, Jessica Reel, the tough-as-nails local policewoman, and his father’s new wife.” —AudioFile