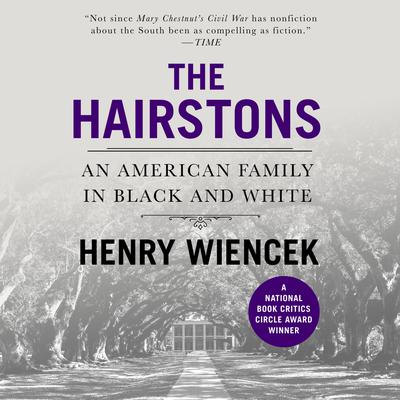 The Hairstons: An American Family in Black and White

The Hairstons is the extraordinary story of the largest family in America, the Hairston clan. With several thousand black and white members, the Hairstons share a complex and compelling history: divided in the time of slavery, they have come to embrace their past as one family.

The black family's story is most exceptional. It is the account of the rise of a remarkable people―the children, grandchildren, and great-grandchildren of slaves―who took their rightful place in mainstream America.

In contrast, it has been the fate of the white family―once one of the wealthiest in America―to endure the decline and fall of the Old South, and to become an apparent metaphor for that demise. But the family's fall from grace is only part of the tale. Beneath the surface lay a hidden history―the history of slavery's curse and how that curse plagued slaveholders for generations.

For the past seven years, journalist Wiencek has listened raptly to the tales of hundreds of Hairston relatives, including the aging scions of both the white and black clans. He has crisscrossed the old plantation country in Virginia, North Carolina, and Mississippi to seek out the descendants of slaves. Visiting family reunions, interviewing family members, and exploring old plantations, Wiencek combs the far-reaching branches of the Hairston family tree to gather anecdotes from members about their ancestors and piece together a family history that involves the experiences of both plantation owners and their slaves. He expertly weaves the Hairstons' stories from all sides of historical events like slave emancipation, Reconstruction, school segregation, and lynching.

Paradoxically, Wiencek demonstrates that these families found that the way to come to terms with the past was to embrace it, and this lyrical work, a parable of redemption, may in the end serve as a vital contribution to our nation's attempt to undo the twisted historical legacy of the past.

A look at the largest slaveholders in the South and black and white families they spawned. Once they ruled over a pre-Civil War kingdom that spanned 45 plantations spread out over four states and included 10,000 slaves. To keep it all intact, they did what European aristocracy did: they married their own. And as one might imagine, this created a huge and maddeningly complex genealogical configuration, hard to decipher, to say the least. Undaunted, Wiencek, who has written for Smithsonian and American Heritage magazines, has spent eight years unraveling the mystery of the Hairstons (pronounced Harston), said to be 'the largest family in America.' What Wiencek has turned up is nothing if not intriguing, including aspects which are worthy of further exploration . . . Amid these huge plantations, for example, are unacknowledged children of their masters who become enslaved butlers, servants, and housekeepers, or children who were forced to keep their mother's maiden name to disguise their heritage. . . [An] eerily fascinating account.” ―Kirkus Reviews —
Wiencek's lovingly detailed history of the complicated relationships among the various strains of this huge, tragically divided Old South family has been called a metaphor for the nation, but a more accurate description would lie in the words of Robert Penn Warren, who said, 'The past is never past.'” ―The Dallas Morning News —
This is a moving and timely story of that which separates and binds black and white America. The Hairstons helps us understand our common past and present.” ―Julian Bond —
Not since Mary Chestnut's Civil War has nonfiction about the South been as compelling as fiction.” ―Time —
The Hairstons is an epic . . . Enthralling . . . creates a profound understanding of slavery, Jim Crow, and the civil rights movement. He uses documents, sometimes centuries old, to bring these Hairstons vividly to life.” ―Howard Kissel, New York Daily News —
“One would have to be hard-hearted indeed not to be moved by the big story this book tells . . . or by the little stories it tells of individual Hairstons whose lives reveal so much about what it is to be an American . . . It is scrupulous and honest in all respects, and a powerful testament to what this country, at its best, can be.” ―Jonathan Yardley, Washington Post Book World —

Henry Wiencek, a nationally prominent historian and writer, is the author of several books, including The Hairstons: An American Family in Black and White, which won the National Book Critics’ Circle Award in 1999. He lives with his wife and son in Charlottesville, Virginia.