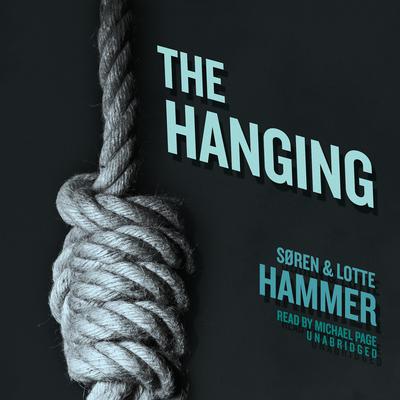 By Lotte Hammer and Søren Hammer
Read by Michael Page

One morning before school, two children find the naked bodies of five men hanging from the gym ceiling. The case leads detective Konrad Simonsen and his murder squad to the school janitor, who may know more about the killings than he is telling. Soon Simonsen realizes that each of the five murdered men had the same dark and terrible secret. And when Simonsen's own daughter is targeted, he must race to find the culprit before his whole world is destroyed.

Published in twenty countries around the world, with more than 150,000 copies sold in Denmark alone, this book introduces a brother and sister duo who have taken the thriller world by storm. Fast-paced, suspenseful, and brilliantly written, The Hanging is a stunning crime novel from Lotte and S├©ren Hammer, two Danish authors whose international fame is exploding.

“The best Danish crime fiction in years.” —Lars Kepler, New York Times bestselling author of The Hypnotist
“Enthralling, pacey, and intricately plotted, The Hanging kept me on the edge of my seat and illuminated a dark corner of Danish society.” —Denise Hamilton, Edgar finalist and editor of Los Angeles Noir

Lotte and Søren Hammer are siblings. They are the authors of the Konrad Simonsen series. Their first book, The Hanging, was published in English in 2013. The writing pair has a huge following throughout Europe.

Lotte and Søren Hammer are siblings. They are the authors of the Konrad Simonsen series. Their first book, The Hanging, was published in English in 2013. The writing pair has a huge following throughout Europe.