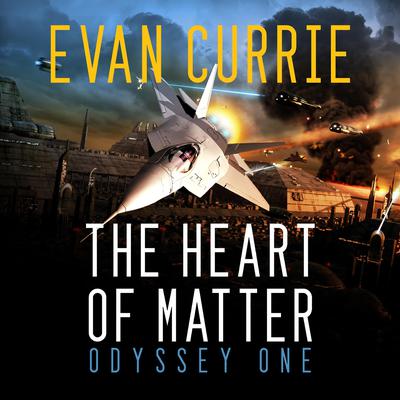 The Heart of Matter

The Odyssey One Series: Book 2

After an epic maiden voyage that introduced Earth to a larger universe—and a cosmos full of terrifying new enemies—Captain Eric Weston and the crew of the NAC spacecraft Odyssey have spent months cooling their heels under their admiral’s watchful eye. But when Earth’s newest ally, the Priminae, strike a defense deal with the North American Confederacy, the Odyssey finally receives her orders: return to Ranquil, the Priminae’s war-ravaged homeworld, and lend badly needed support against the invading Drasin.

Weston and his crew are hungry for action, yet once back on Ranquil, they realize not all is as it seems. Yes, the Drasin are a formidable foe, but Weston suspects a powerful unseen force is waging the war that could alter forever the face of the universe. Determined to unmask the mysterious puppet masters, Weston and his motley crew defy NAC protocol and venture into deep space…where they will discover an enemy unlike any they have ever faced. The long-awaited follow-up to the spectacular Into the Black: Odyssey One combines old-school space opera with modern storytelling to create an exhilarating new sci-fi adventure.

Evan Currie is the bestselling author of the Odyssey One series, the Warrior’s Wings series, and more. Although his post-secondary education was in computer sciences, and he has worked in the local lobster industry steadily over the last decade, writing has always been his true passion.