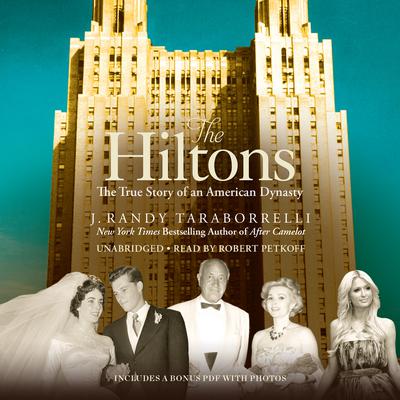 The Hiltons: The True Story of an American Dynasty

The Hiltons is a fascinating, no-holds-barred account of the American industrial giant who built the world's greatest hotel empire and his always larger-than-life family.

Demanding and enigmatic, patriarch Conrad Hilton's visionary ideas and unyielding will established the model for the modern luxury hotel industry. But outside the boardroom, Conrad struggled with emotional detachment, failed marriages, and conflicted Catholicism.

Then there are the Hilton children: Playboy Nicky's tragic alcoholism and passionate but abusive relationship with Elizabeth Taylor was the stuff of tabloid legend. Serious Barron, on the other hand, deftly handled his father's legacy, carrying the Hilton brand triumphantly into the new millennium. Eric, raised apart from his older brothers, accepted his supporting role in the Hilton dynasty with calm and quiet—a stark contrast to the boys' much younger half-sister Francesca, whose battle for recognition led her into courtrooms and conflict.

The cast of supporting players includes the inimitable Zsa Zsa Gabor, who was married to Conrad briefly but remained a thorn in his side for decades; a young Donald Trump; and a host of other Hollywood and business luminaries with whom the Hiltons crossed paths and swords over the years.

The Hiltons is a sweeping saga of the success—and excess—of an iconic and only-in-America family dynasty.

“Two things stand out in this rags-to-riches tale: the driven work ethic and astute business sense of the patriarch, and the glamour and opulence of a well-rewarded life. There is drama, surely—court cases and break-ups abound—but those that wonder how the Hilton hotel empire came to be will get their answer: hard work. The story is full of celebrities—including Elizabeth Taylor, Joan Collins, Debbie Reynolds, and Donald Trump—and it’s a paean to a bygone era that also contains a few nuggets on how best to conduct oneself en route to the high life.” —Publishers Weekly
“A bestselling celebrity biographer chronicles the epic saga of a family as well known for its business empire as for its role as tabloid fodder…Taraborrelli has written the definitive biography of a family whose glory days may have passed but which simply refuses to recede into the background.” —Kirkus Reviews

J. Randy Taraborrelli is the author of numerous books, including the New York Times bestsellers Call Her Miss Ross; Michael Jackson; Sinatra; Madonna; Jackie, Ethel, Joan; and Elizabeth. The Los Angeles writer is not only a respected journalist but also a recognizable entertainment personality and in-demand guest on many television programs, including Today, Good Morning America, The Early Show, Entertainment Tonight, The Insider, and CNN Headline News. Additionally, he works for CBS News as a news analyst.