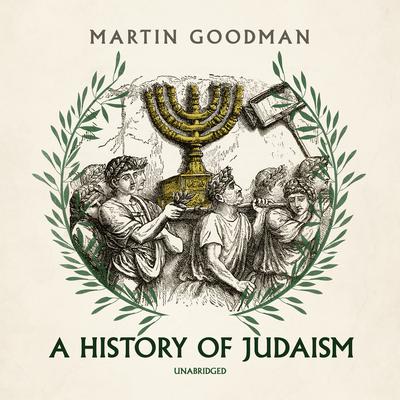 A History of Judaism

A sweeping history of Judaism over more than three millennia

Judaism is one of the oldest religions in the world, and it has preserved its distinctive identity despite the extraordinarily diverse forms and beliefs it has embodied over the course of more than three millennia. A History of Judaism provides the first truly comprehensive look in one volume at how this great religion came to be, how it has evolved from one age to the next, and how its various strains, sects, and traditions have related to each other.

In this magisterial and elegantly written book, Martin Goodman takes readers from Judaism’s origins in the polytheistic world of the second and first millennia BCE to the temple cult at the time of Jesus. He tells the stories of the rabbis, mystics, and messiahs of the medieval and early modern periods and guides us through the many varieties of Judaism today. Goodman’s compelling narrative spans the globe, from the Middle East, Europe, and America to North Africa, China, and India. He explains the institutions and ideas on which all forms of Judaism are based, and masterfully weaves together the different threads of doctrinal and philosophical debate that run throughout its history.

A History of Judaism is a spellbinding chronicle of a vibrant and multifaceted religious tradition that has shaped the spiritual heritage of humankind like no other.

“Taking in three millennia of religious thought and practice, Goodman’s scholarship is formidable.” —Guardian (London)
“For Goodman…the Jewish story has much more to do with shared ideas and beliefs…[and] what made Jews Jews.” —New Yorker
“Goodman…sketches every figure, defines every movement and captures the ‘kaleidoscopic variety’ of Judaism’s modulating expressions without losing sight of its living core.” —Wall Street Journal
“A hugely welcome addition to the library of Jewish studies for the general reader and an absolute godsend for rabbis always perplexed by what book they should recommend to people about how Jewish beliefs and practices have evolved…encapsulating most of Jewish thought over four millennia in one extraordinarily readable volume.” —Literary Review
“This is the rare scholarly volume that offers new insights and details for the lay and academic reader alike.” —Publishers Weekly (starred review)
“An expansive and fascinating history…A masterpiece of pedagogy crafted as a tool for teaching and learning about one of civilization’s oldest religions.” —Kirkus Reviews (starred review)
“Accessible and engaging to listeners…With a British accent and an appropriate vocal pitch, Perkins smoothly pronounces Hebrew terms and makes clear where explanations appear in his delivery of theological/legal texts. This work is unusual because it follows the history of the religion rather than the more frequently documented history of Jews as a people or the first centuries of emerging monotheism.” —AudioFile
“One won’t find within a single volume a more comprehensive account of Jewish religious history.” — Moment Magazine
“Keenly conceived, tightly constructed, and very well written.” —Reading Religion
"A History of Judaism is an accessible read. While expansive in content, it does not overwhelm the reader with details of Jewish history that might detract from a broader understanding of Judaism’s complex and nuanced development.” — The Jewish Book Council
“Martin Goodman writes with the intimacy of an insider and the breadth of an incisive scholar. At once lucid and authoritative, expansive and nuanced, his book is the finest introduction to Judaism written in recent years.” —Steven J. Zipperstein, author of Pogrom: Kishinev and the Tilt of History

Martin Goodman is professor of Jewish studies at the University of Oxford, where he is president of the Oxford Centre for Hebrew and Jewish Studies and a fellow of Wolfson College. His books include Rome and Jerusalem: The Clash of Ancient Civilizations and The Oxford Handbook of Jewish Studies.