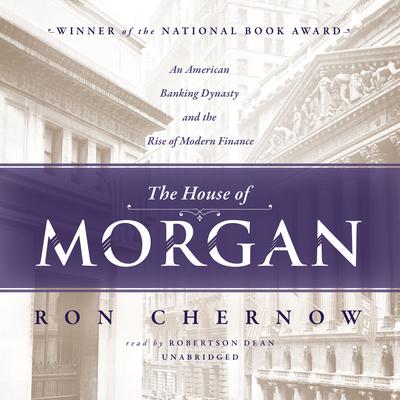 The House of Morgan: An American Banking Dynasty and the Rise of Modern Finance

Winner of the 1990 National Book Award for Nonfiction

Winner of the 1991 Ambassador Book Award for Biography/Autobiography

Winner of the National Book Award and now considered a classic, The House of Morgan is the most ambitious history ever written about an American banking dynasty. Acclaimed by the Wall Street Journal as "brilliantly researched and written," the book tells the rich, panoramic story of four generations of Morgans and the powerful, secretive firms they spawned. It is the definitive account of the rise of the modern financial world. A gripping history of banking and the booms and busts that shaped the world on both sides of the Atlantic, The House of Morgan traces the trajectory of the J. P. Morgan empire from its obscure beginnings in Victorian London to the crash of 1987. Ron Chernow paints a fascinating portrait of the private saga of the Morgans and the rarefied world of the American and British elite in which they moved. Based on extensive interviews and access to the family and business archives, The House of Morgan is an investigative masterpiece, a compelling account of a remarkable institution and the men who ran it, and an essential book for understanding the money and power behind the major historical events of the last 150 years.

“As a portrait of finance, politics, and the world of avarice and ambition on Wall Street, the book has the movement and tension of an epic novel. It is, quite simply, a tour de force.” —New York Times Book Review
“As informative and entertaining a history, especially of the period from 1880 to 1930, as this reviewer has ever read…Nowhere has our tenuous financial system been better described than by Chernow.” —Los Angeles Times Book Review
“Robertson Dean’s capable reading and eminently listenable voice…[keep] the story moving forward…This audiobook lays the groundwork for an understanding of modern finance.” —AudioFile
“To a potentially dry and certainly difficult subject—the influence of high finance on modern life—Chernow brings a lively style and the endurance of a trouper.” —Wall Street Journal
“A panoramic and well-researched look at the most powerful family of banks in America over the last century…Chernow has a supple, refined style.” —Washington Post Book World
“Chernow deftly mixes biography with economics and explicates arcane matters of high finance with sparkling clarity…A fascinating historical journey from Charles Dickens’ London to Tom Wolfe’s New York.” —Atlantic
“Epic…Chernow melds deep insights into the life and times of Morgan bankers over 150 years with the flow of world history and the growth of banking and finance. With rich detail and warmth, he brings to life the defunct species of gentleman banker.” —Chicago Tribune
“An astonishingly detailed and fascinating story of the Morgan banks and the men who have run them. Chernow uses his gift for description to bring out vividly the personalities of his principals.” —San Francisco Chronicle
“Chernow vividly portrays the influence that the Morgan banks have had on the history of the Western economy since the late eighteenth century…Superb history.” —Library Journal (starred review)
“A brilliant, generation-spanning history of the Morgan banking empire, which offers a wealth of social and political as well as economic perspectives.” —Kirkus Reviews (starred review)
“Packed with revelations, Chernow’s mammoth history demystifies the inner workings of the secretive Morgan banking empire.” —Publishers Weekly

Ron Chernow’s first book, The House of Morgan, won the National Book Award and the Ambassador Award for his contribution to the study of American culture. Washington: A Life won the 2011 Pulitzer Prize for Biography, and Alexander Hamilton was the inspiration for the Broadway musical. The Warburgs won the Eccles Prize for Excellence in Economic Writing in 1993 and was also selected by the American Library Association as one of that year’s best nonfiction books.